A Haunted Temple in Inaba Province 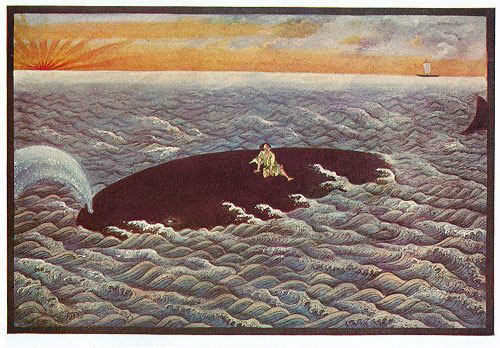 THERE are many stories and superstitions regarding whales. I take one, dating back to the period of 'Hoen' (1135), which will show the veneration and the fear in which the Japanese have always held these creatures. I will annex the translation by Mr. Ando, of our Consulate, of a newspaper paragraph of date February 12, 1907, showing that the superstitions are still current.

Some hundred and seventy-two years ago, when the 'Hoen' period began, the shrine of Atsuta at Nagoya was burned down. For some reason this calamity was said at the time to have happened because the head shrine-watcher, Yoda Emon, had startled one of the gods. [196:1]

Well, at any rate the holy shrine was burned down, and the caretaker was exiled to Oshima Island, in Idzu Province, now generally known as 'Vries' Island. It is the largest and most northerly of the group of islands which run in a chain towards the south-east. The nearest to Oshima is Toshi Island, often named Rishima, of which our story is told.

Yoda Emon was a man of active mind and pursuits. Perhaps that is why he startled the god who caused the fire at Atsuta. In any case, he felt his exile greatly. He could gain no news of home or family, and he fretted and worried himself to such an extent that at last his nights became sleepless and he thought to himself that if some relief to his mind did not come soon he must either kill himself or go mad.

At last it occurred to him that possibly he might get permission to go fishing; and the permission was given him, on condition that he kept within a mile of the shore. Day after day Yoda took the boat which was lent him, and returned generally with a goodly supply of fish, singing to himself as he rowed in to and out from the shore. He soon managed to sleep soundly and regain his strength. After a month or two Yoda became quite a popular person, giving his fish away free to any who chose to take them, and he was soon allowed a wider range than the one-mile limit. He became an expert sailor, and had it not been for the loss of his family he would have been quite happy in his new home. One day, the morning being calm, Yoda ventured farther away than usual, hoping to capture some of the larger fish which were reputed to be plentiful some ten miles from Toshishima. He was lucky, and landed three magnificent fish of the mackerel family, known as 'sara' in Japan, 'seer' in India, and 'albacore' with us in England, who never see them. Unfortunately, after this the wind, instead of springing up from the south-east as usual, came out from the north-west, and, instead of being able to return to Oshima, Yoda found himself being blown farther from it. The wind came stronger and stronger, until a gale was blowing, and soon the currents caused a high and breaking sea. Darkness set in, and Yoda thought to himself that this was a visitation upon him for having caught fish. 'Oh,' cried he aloud, 'what foolish sin have I now committed? Surely my position as a banished priest should have told me that I was sinning in catching fish!' He flung himself on the bottom of the boat and prayed; but his prayers availed him nothing, for the wind increased in force, and so did the sea. Long after midnight a big wave smashed the boat to splinters. Half-stunned, half-drowned, Yoda clung to the large oar, and so remained for some three hours.

At last he felt himself being bumped against what he took to be a rock, and letting go the oar scrambled on to it more dead than alive. After many efforts, so exhausted was he and so numbed, he sat there only half-conscious in the dark.

Towards morning the turn of tide caused the sea to smooth down, and as the sun rose Yoda found to his horror that it was no rock upon which he sat, but the back of a live whale of gigantic size. Yoda knew neither what to do nor what to think; he dared not move, for fear of disturbing the whale's repose. Not even when the animal blew water and air from its spout-hole did he venture to turn his body. But silently he muttered prayers all the time. At last, when the sun was full up, the whale began to turn round, and as it did so Yoda saw a large fishing-boat not more than half a mile away. He shouted and shouted at the top of his voice, trying to attract attention; but move he dared not, lest the whale should leave him. The wind was still high; but the sea was smooth.

Suddenly the fishing-boat changed its course, and the whale lay still again, basking in the sunshine. The boat advanced rapidly, and when about eighty feet from the whale brought up to the wind and lay still. A life-line with a buoy attached was drifted towards the whale, and when it was near enough Yoda slid off to take it, and was hauled into the boat, thoroughly thankful for his rescue. As soon as Yoda was on board, the boat began to roll, for the whale lashed his tail and was playing about, causing quite a heavy sea; but, to the relief of all, the creature headed south for the open Pacific.

The crew on the fishing-boat belonged to Toshi Island, and had heard of Yoda Emon, and, being good-natured fellows, felt sorry for him in his exile. After his astonishing adventure with the whale, they did not in the least mind taking him back to Oshima, which they reached about sundown.

Yoda immediately reported himself, and was congratulated on his extraordinary escape.

After this Yoda gave up fishing, and submitted without grumbling to the severe discipline of his exile. On the occasion of Prince Tanin ascending the throne, an ordinance was issued giving freedom to many prisoners and exiles. Yoda Emon was among them, and was given permission to return home; but he said he had made so many friends on the island, and his life had been saved so miraculously, that he preferred to live where he was. And he obtained official permission to do so, and to send for his family, which after building a house he did. In the first year of Koji 1142-1141., Yoda was made Mayor of Shichito--that is the seven islands lying round or south of Oshima and including itself. 'Now,' thought he, 'I shall be able to repay the kindness that the whale showed me in saving my life!' And he issued an order that no whales were to be chased or killed anywhere near the islands over which he had jurisdiction. At first there was some grumbling; but the Government sent messengers to Oshima to say that the Emperor approved Yoda Emon's order, and furthermore, that during Yoda's life no whale was to be killed anywhere in Shichito.

WHALE AND WHALER.--Some years ago there lived a wealthy fisherman called Matsushima Tomigoro at Matsushima, in Nagasaki. He made a large fortune by whale-fishing. One night he dreamed a strange dream. A whale (zato kujira), carrying a baby whale, appeared before his pillow, and requested him to let her and the baby go safely--they were going to pass a certain part of the sea at a certain time and date. Matsushima heartlessly did not accede, but took advantage of the information. He put a net in the said sea at the due time, and caught a whale and her baby. Not long after, the cruel fisherman began to reap the harvest of his mercilessness. Misfortune after misfortune befell him, and all his wealth disappeared. 'It must be the result of his cruelty in killing the whale and its baby,' said the neighbours; and for some time they never caught whales carrying babies. (Translated by Mr. Ando.)

^196:1 The gods principally worshipped at Atsuta are the Sun Goddess Amateras, her brother Susa-no-o, Prince Yamato-take, his wife Miyazu-hime, and her brother Take-ino-tane; but the object most venerated is the sword called 'Kusa-nagi no Tsurugi,' one of the three principal antique objects which form the Imperial Regalia of Japan, and of which I have previously told a story or two, notably that of 'Yamato-dake no Mikoto' (<page 56> et seq.).