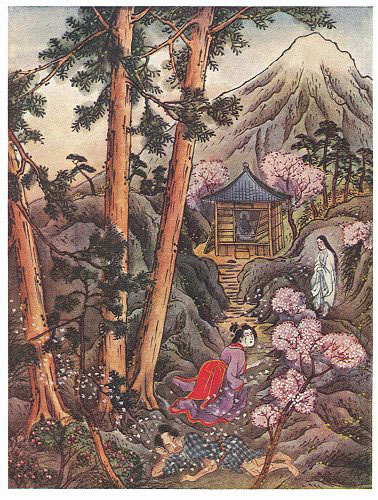 BETWEEN the north-eastern boundary of Totomi Province and the north-western of Suruga Province stands a lofty mountain, Daimugenzan. It is a wild and rugged mountain, clad nearly three-quarters up with lofty pines, yenoki, icho, camphors, etc. There are but few paths, and hardly any one goes up the hill. About half-way up through the forest is a shrine erected to Kwannon; but it is so small that no priest lives there, and the building is rotting away. No one knows why it was put up in such an inaccessible place--except, perhaps, one solitary girl and her parents, who used to go there for some reason of their own.

One day, about 1107 A.D., the girl was praying for her mother's recovery from sickness. Okureha was her name. She lived at Tashiro, at the foot of the mountain, and was the beauty of the countryside,--the daughter of a much-loved samurai of some importance. Amid the solemn silence Okureha clapped her hands thrice before Kwannon as she prayed, causing mountain echoes to resound. Having finished her prayers, Okureha began to make her way downwards, when she was suddenly sprung upon by a ruffianly-looking man, who seized her by the arm.

She cried aloud for help; but nothing came except the echoes of her voice, and she gave herself up for lost.

Suddenly a piercing cold breeze came along, carrying the autumn leaves in little columns. Okureha struggled violently with her assailant, who seemed to weaken to the cold wind as it struck his face. Okureha weakened too. In a few seconds the man fell down as in a drunken sleep, and she was on the point of falling (she knew not why) and of sleeping (scarce could she keep her eyes open). Just then the wind came hot instead of cold, and she felt herself awake again. On looking up she saw advancing towards her a beautiful girl, apparently not many years older than herself. The stranger was dressed in white, and seemed to glide. Her face was white as the snow which capped Mount Daimugenzan; her brows were crescent-shaped, like those of Buddha; her mouth was like flowers. In a silvery voice she called to Okureha, saying:

'Be neither surprised nor afraid, my child. I saw that you were in danger, and I came to your rescue by putting that savage creature to sleep; I sent the warm breeze so that you might not fall. You need not fear that the man is dead. I can revive him if I choose, or keep him as he is if I wish. What is your name?' 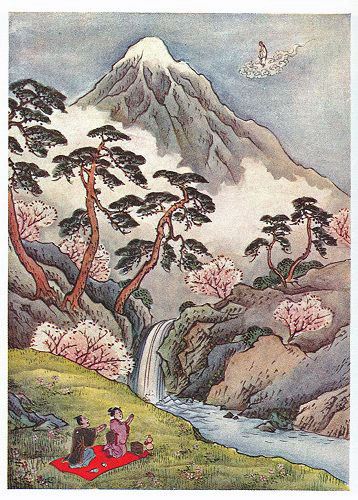 Okureha fell on her knees to express her thanks, and, rising, said: 'My name is Okureha. My father is the samurai who owns the greater part of the village of Tashiro, at the foot of the mountain. My mother being ill, I have come up to this old shrine to pray Kwannon for her recovery. Five times have I been up before, but never met anyone until today, when this dreadful man attacked me. I owe my deliverance entirely to you, holy lady, and I am humbly and deeply grateful. I do hope I shall be able to come here and pray at this shrine again. My father and mother prayed here before I was born both to Kwannon and to the Tennin [180:1] of the mountain. They had no child, and I was sent to them after their prayers. Therefore it is right that I should come here to pray for my mother; but this horrid man has frightened me so that I shall be afraid to come alone again.'

The Mountain Goddess (for such was Okureha's rescuer) smiled, and said: 'You need have no fear, my pretty child. Come here when you will, and I shall be your protector. Children who are as devoted to their parents as you are deserve all that is good, and are holy in themselves. If you wish to please me, come again to-morrow, so that we may converse; and bring me some flowers from the fields, for I never descend low enough on earth to get these, though they are my favourites--they smell so sweet. And now you had better go home. When you have had time to reach there I will restore this horrid man to life and let him go. He is not likely to return to molest you.'

'I shall be here to-morrow,' said Okureha, bowing her thanks amid her 'Sayonaras.'

Okureha San was so much impressed by the face of the Goddess that she could not sleep, and at daybreak next morning was out in the fields gathering flowers, which she took up the mountain to the shrine, where she found the goddess waiting.

They talked on many subjects, and enjoyed each other's company, and arranged to meet often. Consequently, whenever Okureha had time she always went up the mountain. This continued for nearly a year, when Okureha went up with flowers for the goddess as usual; but she was looking sad, and felt sad.

'Ah, your Holiness is right,' said Okureha. 'I am sad, for this may be the last day I can come up here and see you. I am now seventeen years of age, and my parents think me old enough to marry. Twelve years ago my father arranged that I should marry the son of one of his friends, Tokue, of Iwasakimura, when we were old enough. Now I am said to be old enough: so I must marry. The wedding is to be in three days. After that I shall have to stay at home and work for my husband, and I fear I shall not see you anymore. That is why I am sad.' As she spoke tears ran down her cheeks, and there was for a few moments no consoling her; but the goddess soothed her, saying:

'You must not be sad, dear child. On the contrary, you are about to enter the happiest state of life, by being married. If people were not married, and did not produce children to inherit new spirits and life, there could be no continuation. Go back, my child, happily; get married and produce children. You will be happy and doing your duty to the world and to the goddess. Before we say farewell, I give you this small gourd of furoshu. [182:1] Take care of it on your way down the mountain, and when you are married give some to your husband. You will both remain as you are in appearance, never growing a day older though you live for centuries, as you will do; and also it will bring you perfect happiness. Now, farewell!'

Again the tears came to Okureha's eyes as she bade farewell to her benefactress; but she mustered all her pluck, and, making her last bow, took her way down the mountain, weeping as she went. Three days later Okureha was married. It was a lucky day according to the calendars, and, moreover, it was the year that the Emperor Toba came to the throne, 1108 A.D.

One day, when celebrating this event at a picnic, Okureha gave her husband some of the furoshu sake, and took the rest herself, as the goddess had bidden her. They were sitting on a beautiful green grassy spot, whereon grew wild violets of delicious fragrance; at their feet gurgled a mountain stream of sparkling clearness. To their surprise, they found petals of cherry blossom suddenly falling all round them. There were no cherry trees near, and at first they were much puzzled; but they saw in the blue sky one white cloud which had just sailed over them, and seated thereon was the Goddess of Mount Daimugenzan. Okureha recognised her, and pointed her out to her husband as their benefactress. The white cloud carried her up to the top of the mountain, where it hovered until the shades of evening hid it.

Okureha and her husband never grew older. They lived for hundreds of years as Sennins in Mount Daimugenzan.