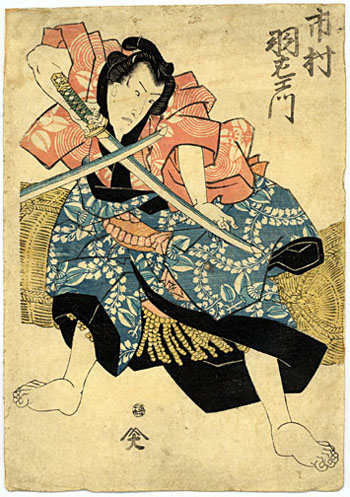 IDE KAMMOTSU was a vassal of the Lord of Nakura town, in Kishu. His ancestors had all been brave warriors, and he had greatly distinguished himself in a battle at Shizugatake, which took its name from a mountain in the province of Omi. The great Hideyoshi had successfully fought in the same place so far back as in the eleventh year of the Tensho Era 1573-1592--that is, 1584--with Shibata Katsuiye. Ide Kammotsu's ancestors were loyal men. One of them as a warrior had a reputation second to none. He had cut the heads off no fewer than forty-eight men with one sword. In due time this weapon came to Ide Kammotsu, and was kept by him as a most valuable family treasure. Rather early in life Kammotsu found himself a widower. His young wife left a son, called Fujiwaka. By and by Kammotsu, feeling lonely, married a lady whose name was Sadako. Sadako later bore a son, who was called Goroh. Twelve or fourteen years after that, Kammotsu himself died, leaving the two sons in charge of Sadako. Fujiwaka was at that time nineteen years of age.

Sadako became jealous of Fujiwaka, knowing him, as the elder son, to be the heir to Kammotsu's property. She tried by every means to put her own son Goroh first.

In the meantime a little romance was secretly going on between a beautiful girl called Tae, daughter of Iwasa Shiro, and young Fujiwaka. They had fallen in love with each other, were holding secret meetings to their hearts' content, and vowing promises of marriage. At last they were found out, and Sadako made their conduct a pretext for driving Fujiwaka out of the house and depriving him of all rights in the family property.

Attached to the establishment was a faithful old nurse, Matsue, who had brought up Fujiwaka from his infancy. She was grieved at the injustice which had been done; but little did she think of the loss of money or of property in comparison with the loss of the sword, the miraculous sword, of which the outcast son was the proper owner. She thought night and day of how she might get the heirloom for young Fujiwaka.

After many days she came to the conclusion that she must steal the sword from the Ihai (shrine--or rather a wooden tablet in the interior of the shrine, bearing the posthumous name of an ancestor, which represents the spirit of that ancestor).

One day, when her mistress and the others were absent, Matsue stole the sword. No sooner had she done so than it became apparent that it would be some months perhaps before she should be able to put it into the hands of the rightful owner. For of Fujiwaka nothing had been heard since his stepmother had driven him out. Fearing that she might be accused, the faithful Matsue dug a hole in the garden near the ayumiya--a little house, such as is kept in every Japanese gentleman's garden for performing the Tea Ceremony in,--and there she put the sword, meaning to keep it hidden until such time as she should be able to present it to Fujiwaka.

Sadako, having occasion to go to the butsudan the day after, missed the sword; and, knowing O Matsue to have been the only servant left in the house at the time, taxed her with the theft of the sword.

Matsue denied the theft, thinking that in the cause of justice it was right of her to do so; but it was not easy to persuade Sadako, who had Matsue confined in an outhouse and gave orders that neither rice nor water was to be given her until she confessed. No one was allowed to go near Matsue except Sadako herself, who kept the key of the shed, which she visited only once every four or five days.

About the tenth day poor Matsue died from starvation. She had stuck faithfully to her resolution that she would keep the sword and deliver it someday to her young master, the lawful heir. No one knew of Matsue's death. The evening on which she had died found Sadako seated in an old shed in a remote part of the garden, and trying to cool herself, for it was very hot.

After she had sat for about half-an-hour she suddenly saw the figure of an emaciated woman with disheveled hair. The figure appeared from behind a stone lantern, glided along towards the place where Sadako was seated, and looked full into Sadako's face.

Sadako immediately recognized Matsue, and upbraided her loudly for breaking out of her prison.

'Go back, you thieving woman!' said she. 'I have not half finished with you yet. How dare you leave the place where you were locked up and come to confront me?'

The figure gave no answer, but glided slowly along to the spot where the sword had been buried, and dug it up.

Sadako watched carefully, and, being no coward, rushed at the figure of Matsue, intending to seize the sword. Figure and sword suddenly disappeared.

Sadako then ran at top speed to the shed where Matsue had been imprisoned, and flung the door open with violence. Before her lay Matsue dead, evidently having been so for two or three days; her body was thin and emaciated. '

Sadako perceived that it must have been the ghost of O Matsue that she had seen, and mumbled 'Namu Amida Butsu; Namu Amida Butsu,' the Buddhist prayer asking for protection or mercy.

After having been driven from his family home, Ide Fujiwaka had wandered to many places, begging his food. At last he got some small employment, and was able to support himself at a very cheap inn at Umamachi Asakusa Temple.

One midnight he awoke and found standing at the foot of his bed the emaciated figure of his old nurse, bearing in her hands the precious sword, the heirloom valued beyond all others. It was wrapped in scarlet and gold brocade, as it had been before, and it was laid reverentially by the figure of O Matsue at Fujiwaka's feet.

'Oh, my dear nurse,' said he, 'how glad am I------' Before he had closed his sentence the figure had disappeared.

My story-teller did not say what became of Sadako or of her son.