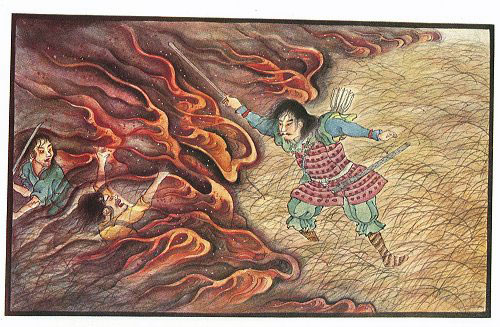 ABOUT the year 110 B.C. there lived a brave prince known in Japanese history as Yamato-dake no Mikoto. [56:1] He was a great warrior, as was his son, who is said to have been a husband to the Empress Jingo--I presume a second one, for it could not have been the Emperor who was assassinated before the Empress's conquest of Korea. However, that does not very much matter to my story, which is merely the legend attached to the miraculous sword known as the Kusanagi no Tsurugi (the grass-cutting sword), which is held as one of the three sacred treasures, and is handed down from father to son in the Imperial Family. The sword is kept at the Atsuta Shrine, in Owari Province.

At the date given by my interpreter, 110 B.C. (I should add 'or thereabouts,' allowing large margins), Yamato-dake no Mikoto had been successful at all events in suppressing the revolutionists known as the Kumaso in Kyushu. Being a man of energy, and possessing a strong force of trained men, he resolved that he would suppress the revolutionists up on the north-eastern coasts.

Before starting, Yamato-dake no Mikoto thought he should go to Ise to worship in the temples, to pray for divine aid, and to call on an aunt who lived near. Yamato-dake spent five or six days with his aunt, Princess Yamato Hime, to whom he announced his intention of subduing the rebels. She presented him with her greatest treasure--the miraculous sword--and also with a tinder-and-flint-box.

Before parting with her nephew Yamato Hime no Mikoto said: 'This sword is the most precious thing which I could give you, and will guard you safely through all dangers. Value it accordingly, for it will be one of the sacred treasures.'

(Legend says that in the age of the gods Susanoo-no Mikoto once found an old man and a woman weeping bitterly because a mammoth eight-headed snake had devoured seven of their daughters, and there remained only one more, whom, they felt sure, the eighth serpent's head would take. Susanoo-no Mikoto asked if they would give him the daughter if he killed the snake to which they gladly assented. Susanoo filled eight buckets with sake-wine, and put them where the serpent was likely to come, and, hiding himself in the vicinity, awaited events. The monster came, and the eight heads drank the eight buckets full of sake, and became, naturally, dead-drunk. Susanoo then dashed in and cut the beast to bits. In the tail he found a sword--the celebrated and miraculous sword 'Kusanagi no Tsurugi,' the grass-cutting sword of our story.)

After bidding farewell to Yamato Hime no Mikoto, the Prince took his departure, setting out for the province of Suruga, on the eastern coast, to find what he could hear, it being in a turbulent state; and it was there that he ran into his first danger, and that his enemies laid a trap for him, through their knowledge that he was fond of hunting.

There were some immense rush plains in Suruga Province where now stands the village of Yaitsu Mura ('Yaita' means 'burning fields'). It was resolved by the rebels that one of them should go and invite Yamato-dake to come out and hunt, while they were to scatter and hide themselves in the long grass, until the guide should lead him into their midst, when they would jump up and kill him. Accordingly, they sent to Yamato-dake a plausible and clever man, who told him that there were many deer on the grass plains. Would he come and hunt them? The man volunteered to act as guide.

The invitation was tempting; and, as he had found the country less rebellious than he had expected, the Prince accepted.

When the morning arrived the Prince, in addition to carrying his hunting-bow, carried the sword given him by his aunt, the Princess Yamato. The day was windy, and it was thought by the rebels that as the rushes were so dry it would be more sure, and less dangerous to themselves, to fire the grass, for it was certain that the guide would make the Prince hunt up-wind, and if they fired the grass properly the flames would rush with lightning speed towards him and be absolutely safe for themselves.

Yamato-dake did just as they had expected. He came quietly on, suspecting nothing. Suddenly the rushes took fire in front and at the sides of him. The Prince realized that he had been betrayed. The treacherous guide 'had disappeared. The Prince stood in danger of suffocation and death. The smoke, dense and choking, rushed along with rapidity and great roaring.

Yamato-dake tried to run for the only gap, but was too late. Then he began cutting the grass with his sword, to prevent the fire from reaching him. He found that whichever direction he cut in with his sword, the wind changed to that direction. If to the north he cut, the wind changed to the south and prevented the fire from advancing farther; if to the south, the wind changed to the north; and so on. Taking advantage of this, Yamato-dake retaliated upon his enemies. He got fire from his aunt's tinder-box, and where there was no fire in the rushes he lit them, cutting through the grass at the same time in the direction in which he wished the fire to go. Rushing thus from point to point, he was successful in the endeavour to turn the tables on his enemies, and destroyed them all.

It is important to note that there is in existence a sword, said to be this sword, in the Atsuta Shrine, Owari Province; a great festival in honour of it is held on June 21 every year.

From that place Yamato-dake no Mikoto went on to Sagami Province. Finding things quiet there, he took a ship to cross to Kazusa Province, accompanied by a lady he deeply loved, who was given the title of Hime (Princess) because of Yamato-dake's rank. Her name was Tachibana. They had not got more than ten miles from shore when a terrible storm arose. The ship threatened to go down.

'This,' said Tachibana Hime, 'is the doing of one of the sea-goddesses who thirst for men's lives. I will give her mine, my lord; perhaps that may appease her until you have safely crossed the wicked sea.'

Without further warning, Tachibana Hime cast herself into the sea; the waves closed over her head, to the consternation and grief of all, and to the breaking of Yamato-dake's heart.

As Tachibana Hime had expected, the sea-goddess was appeased. The wind went down, the water calmed, and the ship reached Kazusa Province in safety. Yamato-dake went as far as Yezo, putting down small rebellions on the way.

Several years afterwards, accompanied by many of his old officers, he found himself back on the side of a hill in Sagami Province overlooking the place where poor Tachibana Hime had given up her life for him by throwing herself into the sea. The Prince gazed sadly at the sea, and thrice exclaimed, with tears flowing down his cheeks,--brave though he was--'Azuma waya!' (Alas, my dearest wife!); and Eastern Japan, about the middle, has since then been called 'Azuma.'

^56:1 Yamato-dake no Mikoto, one of the eighty children of the Emperor Keiko, was a great hero of the prehistoric age. While yet a stripling he was sent by his father to destroy the rebels of Western Japan. In order to accomplish this end he borrowed the gown of his aunt, who was high priestess of Ise, and, thus disguised, made the rebel chieftains fall in love with him while carousing in the cave where they dwelt. Then, suddenly drawing a sword from his bosom, he smote them to death. He next subdued the province of Izumo, and finally conquered Eastern Japan, which was at that time a barbarous waste. After many adventures, both warlike and amorous, he died on the homeward march to Yamato, where the Emperor, his father, held Court.

We have 1778 guests and no members online