A Story Of Mount Kanzanrei 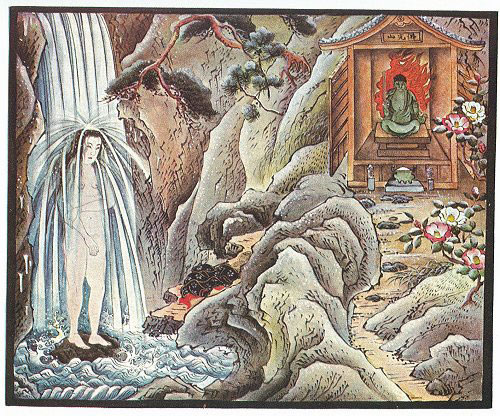 SOME seventy years ago there dwelt in Kyoto a celebrated swordmaker, a native of the province of Awa, in Tokushima. Awanokami Masakuni--for such was his name--dwelt in Kyoto for the purpose of business, and because he was nearer the homes of the grandees, for whom it paid him best to make swords. With him lived his beautiful little daughter Ai, or O Ai San ('Ai' meaning 'love'). She was fourteen, and only a child; but her beauty was enough to make her an object of affection to anyone who happened to see her. O Ai thought of no one but her father, and of him she was extremely fond.

As time went on Masakuni so improved in the art of making swords and forging blades that he came to be regarded with much jealousy by the other swordmakers, all of whom, including Masakuni, lived in the Karasu-Tengu district of Kyoto, where it was the fashion for swordmakers to dwell in those days. Alas, the skill of Masakuni cost him an eye! Though the samurai and wearers of swords held ethical ideas of honour and Bushi said to be far above the average, it does not appear that the swordmakers were the same. They often committed the most horrible and cowardly crimes. One of these was to put out either one or both of the eyes of their sword-making rivals while they slept. Thus it came to pass one night that little O Ai San was awakened from her sleep by the piercing cry of her father, and found him writhing on the floor in agony, with his right eye stabbed and burst.

O Ai summoned aid; but nothing could save the eye. It was done for; and, though the place could be healed, Masakuni must give up all idea of ever having the use of his right eye again. There was not even the satisfaction of catching his assailant, for he did not know who it was. Amid these circumstances it was evident that Masakuni could no longer remain a swordmaker: after the loss of his eye it would be impossible for him to carry out any of the fine work needed to keep up his reputation. Consequently, he returned to his native village, Ohara, in the province of Awa, with his daughter.

Poor Masakuni had not been long settled in his old home before his left eye began to feel bad, and in less than a week there appeared to be every chance of his losing its use altogether.

Ai was disconsolate. For her dear father to lose the use of both eyes was terrible. She loved him dearly, and knew that his only remaining pleasures in life were herself and beautiful scenery. What could she do, poor child? She waited on him day and night, cooked, and was his nurse. When she had exhausted every means in her power to do good, and her father's left eye grew worse, she betook herself to praying. Daily she toiled up the wild and rocky mountain of Shiratake, near the summit of which there was a little shrine dedicated to Fudo, sometimes thought of as the God of Wisdom. There, day after day, she prayed that she might be led to the knowledge that would cure her father, and, though it was now the icy month of January, after so doing she divested herself of clothing and stood for nearly half an hour under the waterfall from which the mountain takes its name, as was the custom of all who wished to impress upon the Deity the earnestness and sincerity of their prayers.

For three months O Ai had thus gone up the mountain daily to pray and undergo the terrible cold of the waterfall; yet her prayer seemed unanswered, for there was no improvement in her father. O Ai, however, did not lose heart. Towards the end of February she climbed again. In spite of the severe cold (ice was hanging on to many parts of the rock), O Ai, after praying to Fudo San, divested herself of clothing and stepped under the fall, there to continue her prayers as long as she could possibly stand and live. So great was the cold, in a few moments she lost consciousness, and slipped down into the basin of the fall, receiving a severe blow on the head.

Just then, by unusual good fortune, an old man, followed by his servant, came up the mountain and was looking at and admiring the waterfall. The white body of O Ai San caught his eye while it was being churned in the basin of the fall not thirty feet from where he stood. The old man and the servant hastened to pull out the body and began to rub it, and found that life was not extinct. O Ai was half-drowned and numbed, insensible from cold and the blow, and the blood was flowing freely from the wound.

They made up their minds to save this beautiful girl, and set to with vigour. A fire was lit; her clothes were warmed and put on; and in less than twenty minutes she had opened her eyes and was able to speak. Seeing this, the old man asked:

'Is it by accident we find you thus nearly dead, or have you tried to take your own life?'

'No,' said the girl: 'it is not that I wish to take my own life. It is to save the eyesight of my father that I have come here to pray; this is the hundredth day of my prayer. To-morrow and every following day I shall be here to pray again, and so continue; for it is against the teachings of Buddha to despair.' O Ai then related the history of her father's blindness.

'If devotion to duty has its reward, yours, young lady, has come. Perhaps you are not aware who I am. My name is Uozumi, Dr. Uozumi. I am the chief doctor in Kyoto, and am the only one at present who has passed his full degrees in the Medical Sciences of the Dutch. I have just been to the Palace at Yedo, and am now on my return to Kyoto. I have only put in here with my ship for to-day, and have come up this mountain to admire the scenery. Now I have found you, and so grieve with you in your trouble that I will stay here a week or two and see what can be done for your father. Do not let us lose time: put on the rest of your clothes, and let us go to your house.'

O Ai San was delighted. At last, she thought, her prayer had been answered by Fudo San. With joy in her heart, she almost ran down the mountain, forgetting all about her own narrow escape and the long gash she had received in her head. Dr. Uozumi found it hard to keep anywhere near this healthy young maid.

Arrived at the house, Uozumi made an examination of the patient and ordered remedies after the Dutch prescriptions, the medicines for which he fortunately had with him. Day after day the doctor and O Ai attended on Masakuni, and at the end of the tenth day his left eye was perfectly cured.

Masakuni was delighted at the partial recovery of his sight, and, like his daughter, attributed the good fortune of the celebrated doctor's arrival to the mercy of Fudo San. Having purified his body and soul by living on a vegetable diet and bathing in cold water for ten days, he began making two swords, which some time afterwards he finished. One he presented to the god Fudo, and the other to Doctor Uozumi. They were afterwards known as the celebrated swords made by the semi-blind Masakuni.

The doctor thought it a pity to allow such a skilled artist as Masakuni to remain in this remote village of Awa Province, and also that the beautiful O Ai should be allowed to rust there: so he persuaded them to join him in Kyoto. Subsequently he obtained a place as maid of honour in the palace of the Duke of Karasumaru for O Ai San, where she was perfectly happy.

Five years later Masakuni died, and was buried in the cemetery of Toribeyama, at the eastern end of Kyoto. So my story-teller, Fukuga, tells me.

Anchoring in the Heart

We have 2165 guests and no members online