The Temple Of The Awabi 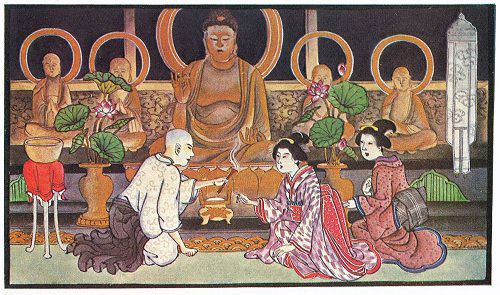 SOME 120 years ago, in the year of Temmei, a most terrible fire broke out in the western corner of Yedo,--the worst fire, probably, that is known to the world's history, for it is said to have destroyed no fewer than 188,000 persons.

At that time there lived in Yedo, now Tokio, a very rich pawnbroker, Enshu Hikoyemon, the proud possessor of a beautiful daughter aged sixteen, whose name was O Same, which in this instance is probably derived from the word 'sameru' (to fade away), for in truth O Same San did fade away.

Enshu Hikoyemon loved his daughter dearly, and, he being a widower with no other child, his thoughts and affections were concentrated on her alone. He had long been rich enough to cast aside the mean thoughts and characteristics which had enabled him to reach his present position. From being a hard-hearted relentless money-grubber, Enshu Hikoyemon had become softhearted and generous--as far, at all events, as his daughter was concerned.

One day the beautiful O Same went to pray at her ancestors' graves. She was accompanied by her maid, and, after saying her prayers, passed the Temple of Hommyoji, which is in the same grounds at Hongo Maru Yama, and there, as she repeated her prayers before the image of Buddha, she saw a young priest, with whom she fell instantly in love. Thitherto she had had no love-affair; nor, indeed, did she fully realise what had happened, beyond the fact that the youth's face pleased her to gaze upon. It was a solemn and noble face. As O Same lit a joss-stick and handed it to the priest, to be placed before Buddha, their hands met, and she felt pass through her body a thrill the like of which she had never experienced. Poor O Same was what is known as madly in love at first sight,--in love so much that as she arose and left the temple all she could see was the face of the young priest; wherever she looked she saw nothing else. She spoke not a word to her maid on the way home, but went straight to her room.

Next morning she announced to the maid that she was indisposed. 'Go,' she said, 'and tell my dear father that I shall remain in bed. I do not feel well this day.'

Next day was much the same, and so were the next and the next.

Hikoyemon, disconsolate, tried every means to enliven his daughter. He sought to get her away to the seaside. He offered to take her to the Holy Temple of Ise or to Kompira. She would not go. Doctors were called, and could find nothing wrong with O Same San. 'She has something on her mind, and when you can get it off she will be well,' was all that they could say.

At last O Same confessed to her father that she had lost her heart to a young priest in the Hommyoji Temple. 'Nay,' she said: 'be not angry with me, father, for I do not know him, and have seen him only once. In that once I loved him, for he has a noble face, which haunts me night and day; and so it is that my heart is heavy, and my body sickens for the want of him. Oh, father, if you love me and wish to save my life, go and find him and tell him that I love him, and that without him I must die!'

Poor Hikoyemon! Here was a nice business--his daughter in love--dying of love for an unknown priest! What was he to do? First he humoured his daughter, and at last, after several days, persuaded her to accompany him to the temple. Unfortunately, they did not see the priest in question; nor did they on a second visit; and after this O Same became more disconsolate than ever, absolutely refusing to leave her room. Night and day her sobs were heard all over the house, and her father was utterly wretched, especially as he had now found out secretly that the priest with whom his daughter had fallen in love was one of the most strict of Buddha's followers, and not likely to err from the disciplinarian rules of religion.

In spite of this, Hikoyemon determined to make an effort in behalf of his daughter. He ventured to the temple alone, saw the priest, told him of his daughter's love, and asked if a union would be possible.

The priest spurned the idea, saying, 'Is it not evident to you by my robes that I have devoted my love to Buddha? It is an insult that you should make such a proposition to me!'

Hikoyemon returned to his home deeply mortified at the rebuff; but felt it his duty to be candid with his daughter.

O Same wept herself into hysterics. She grew worse day by day. Hoping to distract her mind, her father had got made for her a magnificent dress which cost nearly yen 4000. He thought that O Same would be vain enough to wish to put it on, and to go out and show it.

This was no use. O Same was not like other women. She cared not for fine raiment or for creating sensations. She put the costume on in her room, to please her father; but then she took it off again, and went back to her bed, where, two days later, she died of a broken heart.

Hikoyemon felt the loss of his pretty daughter very much. At the funeral there must have been half a mile of flower-bearers.

The superb dress was presented to the temple. Such dresses are carefully kept; they remind the priests to say prayers for their late owners as, every two or three months, they are being dusted and cleaned.

The Vicar or Head Priest of this temple, however, was not a good man. He stole this particular dress of O Same's, knowing the value, and sold it secretly to a second-hand dealer in such things.

Some twelve months later the dress was again donated to the same temple by another father whose daughter had died of a love-affair, he having bought the dress at the second-hand clothes-shop. (This girl died and was buried on the same day of the same month as O Same.)

The priest of the temple was not sorry to see the valuable garment return as a gift to his church, and, being mercenary, he sold it again. It seemed, indeed, a sort of gold-mine to himself and his church. Imagine, therefore, the feeling among the priests when, in the following year, in the same month and on exactly the same day as that on which O Same and the other girl had died, another girl of exactly the same age was buried in their cemetery, having died also of a love-affair, and having also worn the splendid dress that O Same was given, which was duly presented to the temple, at the conclusion of her burial service, for the third time.

To say that the chief priest was astonished would be to say little. He and the rest of them were sorely perplexed and troubled.

There were the honest priests, who had had nothing to do with the selling of the garment, and the dishonest head priest or vicar. The honest men were puzzled. The vicar was frightened into thinking honesty the best policy amid the circumstances. Accordingly, he assembled all the priests of the temple, made a hasty confession, and asked for advice.

The priests came to one conclusion, and that was that the spirit of O Same San was in the dress, and that it must be burned, and burned with some ceremony, so as to appease her spirit. Accordingly a time was fixed. When the day arrived many people came to the temple. A great ceremony was held, and finally the valuable garment was placed upon a stone cut in the shape of a lotus flower and lighted.

The weather was calm at the time; but as the garment took fire a sudden gust of wind came, instantly fanning the whole into flame. The gust increased into a storm, which carried one of the sleeves of the dress up to the ceiling of the temple, where it caught between two rafters and burned viciously. In less than two or three minutes the whole temple was on fire. The fire went on for seven days and seven nights, at the expiration of which time nearly the whole of the south and western portions of Yedo were gone; and gone also were 188,000 people.

The charred remains (as far as possible) were collected and buried, and a temple (which now exists), called 'Eko In,' was built at the spot, to invoke the blessing of Buddha on their souls.

NOTE BY MATSUZAKI.--At the present day the Eko In Temple is well known. Games and wrestling are held there twice a year. Visitors to the temple see the wrestling-place; but no one asks why the temple was built there.