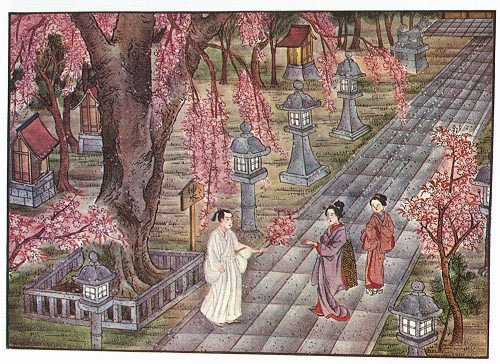 IN the province of Mimasaka is a small town called Kagami, and in the temple grounds is a shrine which has been there for some hundreds of years, and is dedicated to Musubi-no-Kami, the God of Love. Nearby once stood a magnificent old cherry tree which was given the name of Kanzakura, or Holy Cherry, and it is in honour of this tree that the shrine dedicated to the God of Love was built.

Long ago, when the village of Kagami was smaller than it is at present, it had as one of its chief residents a man called Sodayu. Sodayu was one of those men, to be found in most Japanese villages, who with but little work thrive on the work of others and grow richer than most. He bought and he sold their crops, making commission both ways, and before he was middle-aged he was a rich man.

Sodayu was a widower; but he had a lovely daughter who was aged seventeen, and it was thought by Sodayu that the time had now arrived for him to look about for a desirable husband for Hanano. Accordingly he called her to him and said:

'The time has come, my dear child, when it is my duty to find you a suitable husband. When I have done so you will, I trust, approve of him, for it will be your duty to marry him.'

Of course, O Hanano bowed her willingness to do just as her father decreed; but at the same time she confided in her favourite servant Yuka that she did not care about being married to a man that she might not love.

'What can I do--what would you advise me to do--my dear O Yuka? Do try and think how you can help me to obtain a man I can love. A handsome man he must be, and not more than twenty-two years of age.'

O Yuka answered that the advice asked for was difficult to give; but there was one thing, she said. 'You can go to the temple and pray at the shrine of Musubi-no-Kami, the God of Love. Pray him that the husband your father finds may be handsome and after your own heart. They say that if you pray at this shrine twenty-one days in succession you will obtain the kind of lover you want.'

O Hanano was pleased with the idea, and that afternoon, accompanied by Yuka, her maid, she went to pray at the shrine of Musubi-no-Kami. Day after day they continued until the twenty-first and last day of the series had arrived. They had finished their prayers and were on their way from the temple and passing under the great cherry tree known as the 'Kanzakura' or Holy Cherry, when they saw, standing near its stem, a youth of some twenty or twenty-one years. He was handsome, with a pale face and expressive eyes. In his hand he held a branch of cherry-blossom. He smiled pleasantly at Hanano, and she at him; then, bowing, he came forward and smilingly presented her with the blossom. Hanano blushed, and took the flowers. The youth bowed again and walked away; as did Hanano, who had a fluttering heart and felt very happy, for she thought that this youth must be the one sent by the God of Love in answer to her prayers. 'Of course it must be,' she said to O Yuka. This is the twenty-first, and that completes the course of prayer you spoke of. Am I not lucky? And is he not handsome? I do not think it possible that a more handsome youth was ever seen. I wish he had not gone away so soon.' This and much more did O Hanano prattle to her maid on their way home, upon reaching which the first thing she did was to put the cherry-blossom branch into a vase in her own room.

'O Yuka!' she called for the twentieth time at least. 'Now you must go and find out all you can about the young man; but say nothing to my father as yet. Possibly it is not the husband he is choosing for me; but I can love no other, at all events, and I must love him in secret if this is the case. Now go, dear Yuka. Find out all you can and you will prove yourself more faithful and dear to me than ever.' And the faithful maid went on her young mistress's errand.

Now, O Yuka found out nothing about the youth they had seen under the Holy Cherry tree; but she found out that there was another youth in the village who had fallen greatly in love with her mistress, and, as he had heard that O Hanano's father was looking out for a suitable husband, he intended to apply next day himself. His name was Tokunosuke. He was a fairly well-connected youth, and had some means; but his looks were in no way comparable with those of the youth who had handed the cherry branch to Hanano. Having discovered this much, Yuka returned to her young mistress and reported.

Next day, early in the morning, at the most formal calling hour, Tokunosuke went by appointment to see Hanano's father. Hanano was called to serve tea, and saw the young man. Tokunosuke was scrupulously formal and polite to her, and she to him; and soon after he left Hanano was told by her father that that was the young man whom he had chosen to be her husband. 'He is desirable in every way,' he added. 'He has money. His father is my friend, and he has secretly loved you for some months. You can ask for nothing better.'

O Hanano made no answer, but burst out crying and left the room; and Yuka was called in her stead.

'I have found a most desirable young man as husband for your mistress,' said Sodayu; 'but instead of showing pleasure and gratitude she has flown from the room crying. Can you explain to me the reason? You must know her secrets. Has she a lover unknown to me?'

O Yuka was not prepared to face the anger of her mistress's father, and she thought that truth in this especial instance would further Hanano's interests best. So she told the story faithfully and boldly. Sodayu thanked her for it, and again called his daughter to him, telling her that she must either produce her lover or .allow Tokunosuke to call and press his suit. Next morning Tokunosuke did call; but Hanano told him with tears in her eyes that she could not love him, for she loved another, whose name she did not even know herself.

'This is a strange piece of news,' thought Tokunosuke to himself. 'Almost insulting to love a man whose name she does not know!' And, bowing low, he left the house, determined to find out who his nameless rival was, even if he had to disguise himself and follow Hanano to do so.

That very afternoon Hanano and Yuka went to pray as usual, and on coming away they again found the handsome youth standing under the cherry tree, and again he advanced and smilingly handed Hanano a branch full of bloom; but again no words came from his lips, and it was evident to Tokunosuke (who was hiding behind some stone lanterns) that they could not have known each other long.

In a few moments they bowed and separated. O Hanano and her maid walked away from the temple, while the youth under the cherry tree looked after them.

Tokunosuke was now furiously jealous. He came from his hiding-place, and accosted the youth under the cherry tree in a rude and rough tone.

'Who are you, you hateful rascal? Give me your name and address at once! And tell me how you dare tempt the beautiful O Hanano San to love you!' He was about to seize his enemy by the arm when the enemy jumped suddenly back a step, and before Tokunosuke had time to catch him a sudden gust of wind blew the bloom thickly off the cherry tree. So thick and quickly did the blossoms fall, they blinded Tokunosuke for some moments. When he could see again the handsome youth was gone; but there was a strange moaning sound inside the cherry tree, while one of the temple priests came rushing at him in great anger, crying 'Ah! you sacrilegious villain!

What do you mean by attempting violence here? Do you not know that this cherry tree has stood here for hundreds of years? It is sacred, and contains a holy spirit, which sometimes comes forth in the form of a youth. It is he that you tried to touch with your filthy and unholy hand. Begone, I say, and never dare enter this temple again!'

Tokunosuke did not want pressing. He took to his heels and ran, and he ran straight to the house of Sodayu, and told what he had seen, and what had befallen himself, omitting nothing, even to the names the priest had called him.

'Perhaps now your daughter may consent to marry me,' he finished by saying. 'She cannot marry a holy spirit!'

O Hanano was called, and told the story, and was very much upset that the face to whom she had given her heart was that of a spirit. 'What sin have I committed,' she cried, 'falling in love with a god?' And she rushed off to implore forgiveness at the shrine. Long and earnestly she prayed that her sin might be forgiven her. She resolved to devote the rest of her life to the temple, and as she refused to marry she obtained her father's consent. Then she applied for permission to live in the temple and become one of its caretakers. She shaved her head, wore a white linen coat and the crimson pantaloons which denote that you are no longer of the world. O Hanano remained in the temple for the rest of her life, sweeping the grounds, and praying.

The temple still stands. It is highly probable that if the stump of the cherry tree remains another tree is planted beside it, as is usual.