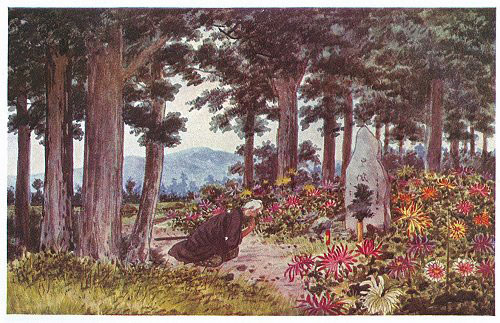 MANY years ago there lived at the foot of the Mountains of Nambu, in Adachi gun, Saitama Prefecture, an old man named Kikuo, which means Chrysanthemum-Old-Man.

Kikuo was a faithful retainer of Tsugaru; he was then called Sawada Hayato. Kikuo was a man of great bodily strength and fine appearance, and had much to do with the efficiency of the small fighting force which protected the feudal lord, the castle, and the estates.

Nevertheless, an evil day came. The feudal lord's small force was overthrown; the estates and castle were lost. The lord and his faithful retainer, with the few survivors, escaped to the mountains, where they continued to think that a day might come when they would be able to have their revenge.

During the enforced idleness Kikuo, knowing his lord's love of flowers (especially of the chrysanthemum), made his mind up to devote all his spare time to making chrysanthemum beds. This, he thought, would lessen the pain of defeat and exile.

The feudal lord was greatly pleased; but his cares and anxieties were not abated. He sickened and died in great poverty, much to the sorrow of Kikuo and the rest of his followers. Kikuo wept night and day over the humble and lonely grave; but he busied himself again to please the spirit of his lord by planting chrysanthemums round the tomb and tending them daily. By and by the border of flowers was thirty yards broad--to the wonder of all who saw. It was because of this that Hayato got the name of Chrysanthemum-Old-Man.

The chrysanthemum is in China a holy flower. Ancient history tells of a man called Hoso (great grandson of the Emperor Juikai) who lived to the age of 800 years without showing the slightest sign of decay. This was attributed to his drinking the dew of the chrysanthemum. Besides his devotion to flowers, Kikuo delighted in children; from the village he called them to his poor hut, and as there was no schoolmaster he taught them to write, to read, and jujitsu. The children loved him, and the good villagers revered him as if he were a kind of god.

In about his eighty-second year Kikuo caught cold, and the fever which came with it gave him great pain.

During the daytime his pupils attended to his wants; but at night the old man was alone in his cottage.

One autumn night he awoke and found standing about his veranda some beautiful children. They did not look quite like any children he knew. They were too beautiful and noble-looking to belong to the poor of the village.

'Kikuo Sama,' cried two of them, 'do not fear us, though we are not real children. We are the spirits of the chrysanthemum which you love so much, and of which you have taken such care. We have come to tell you how sorry we are to see you so ill, although we have heard that in China there once lived a man called Hoso who lived for 800 years by drinking the dew which falls from the flowers. We have tried all we can to prolong your life; but we find that the Heavens do not allow that you should live to a much greater age than you have already reached. In thirty more days you will die. Make ready, therefore, to depart.'

Saying this, they all wept bitterly.

'Good-bye, then,' said Kikuo. 'I have no further hopes of living. Let my death be easy. In the next world I may be able to serve my old lord and master. The only thing that makes me sad to leave this world is you: I must for ever regret to leave my chrysanthemums!' Saying this, he smiled at them in affection.

'You have been very kind to us,' said the Kiku spirits, 'and we love you for it. Man rejoices at birth, and feels sad at death; yet now you shed no tears. You say you do not mind dying except for leaving us. If you die we shall not survive, for it would be useless misery. Believe us when we say that we shall die with you.'

As the spirits of the chrysanthemums finished speaking a puff of wind came about the house, and they disappeared. As the day dawned the old man grew worse, and, strange to say, all the chrysanthemums began to fade--even those which were just beginning to bloom;--the leaves crumpled up and dried.

As the spirits had foretold, at the end of the thirtieth day the old man died. The Kiku flowers died then. Not one was left in the whole district. The villagers could not account for it. They buried the old man near his lord, and, thinking to honour and please him, planted, time after time, chrysanthemums near his grave; but all faded and died as soon as they were planted.

The two little graves were at last given up, and they remain in their solitude, with wild grasses only growing about them.