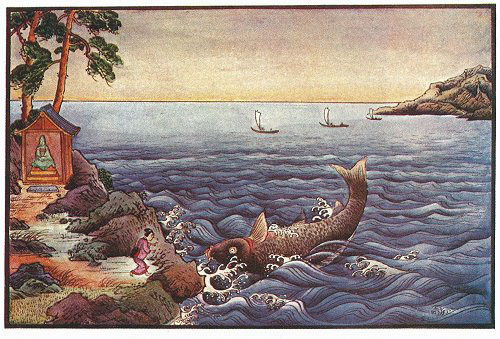 MANY years ago, when I was a boy, there was a song about a Chinaman. It began:

In China once there lived a man,

And his name was Ding-dong-dang.

His legs were long, and his feet were small,

And this Chinese man couldn't walk at all.

Little in those days did I think that I should come across an island--or any other place, for the matter of that--which bore the name of part of this wild and idiotic chorus, 'Chikubu, Chikubu, Chikubu Chang.' It sounds truly wild. Well, so it is. I have found an island on Lake Biwa which is pronounced and spelt exactly as in the chorus of this song of my youth. 'Chikubu' is there, and I am puzzled to know where the composer found it. In my Japanese I can't find it. However, let us to the story. It is not a very good one; but, as it relates to the only island of importance in the lake, it is worth chronicling.

Chikubu-shima is situated about two-thirds up towards the north-western end of Lake Biwa, in Omi Province. The lake is some thirty-five miles long and twelve broad. The island is holy, I believe, and it is said to have been caused by an earthquake nearly 600 years B.C. Fuji Mountain made its appearance at the same time. Thus we have (so far as we like to believe it) the geographical pedigree of Lake Biwa and its principal island.

The nearest land to Chikubu is Tsuzurao Cape, which is about two miles away. There, some three hundred years ago, dwelt two sisters, O Tsuru and Kame. They were fifteen and eleven respectively, and dwelt with their old and only uncle, their father and mother and all their other relations being dead. Tsuru (the crane) and Kame (the turtle) were devoted to each other; in fact, the poor girls clung to each other as the remnants of a family should cling. They loved each other. They were inseparable.

At that time there was much fear among the inhabitants of Tsuzurao Point of a large carp--a carp of such size that it was called 'The Master of Lake Biwa.' It was said that this fish ate dogs, cats, and sometimes people, if they were unwise enough to swim into water sufficiently deep for him to manoeuvre in. His principal hover was in the waters surrounding Chikubu Island, at the northern end of the lake.

When O Tsuru reached the age of fifteen, and her sister O Kame was eleven, O Tsuru became sick with consumption; from bad she grew worse, and her poor little sister O Kame became quite disconsolate; she cried because of her sister's illness, and went by herself to pray at all the temples in the neighbourhood. Day after day she thought of nothing but her sister's illness; but all she did, poor child, was in vain. O Tsuru became worse.

In her great distress O Kame thought that she should venture to the wild and sacred island of Chikubu, there to pray to the Goddess of Mercy, Kwannon. To do so with any chance of her prayers being heard, it was necessary that she should go alone. She would row off secretly that night.

After darkness had come and her uncle's household had gone to sleep, O Kame crept forth and went down to the edge of the lake, where her uncle's boat and many others lay. Getting into one, the lightest she could find, she sculled towards Chikubu Island. The sky was clear and the water glistened.

In less than an hour this whole-hearted child of Nippon was kneeling before the ever-pleasing and soothing figure of Kwannon, the goddess ever ready to listen to the prayers of the unhappy; and there she prayed to the full extent of her feelings, weeping between-times in sorrow for the sickness of her sister.

When poor O Kame had finished praying she got into her boat and began to row back to Tsuzurao. She had got within half-a-mile of that place when a terrible storm arose, and in the third squall her boat was capsized. O Kame was no swimmer, and as she sank into the depths of the lake the giant carp saw her, and instantly carried her off and devoured her.

Next morning there was consternation at Tsuzurao. When it was found that both O Kame San and one of the fishermen's boats were missing it was naturally surmised that she had gone out on the lake, and probably to Chikubu Island to pray to Kwannon.

Boats went off in search; but nothing could be found, save the marks of her footsteps from the shore to the shrine dedicated to Kwannon. On hearing this sad news, O Tsuru, who lay nigh unto death, became worse; but in spite of her sad condition she could not bear the idea of lingering on in the world without her sister O Kame. Consequently she resolved to destroy her life as near as she could think to the place where O Kame had died, so that her spirit might journey with hers until perhaps they should become born again together. At all events, it was clearly her duty to follow her sister.

When the dusk of evening arrived O Tsuru crept out from her room and gained the beach, where she, like her little sister, took the lightest boat which she could find, and rowed herself out, in spite of her weakness, to a spot where she thought that the carp might have killed her sister. There, standing in the bows of the boat, she cried aloud:

'Oh, mighty carp, that hast devoured my sister, devour me also, that our spirits may follow the same path and become reunited. It is for this I cast myself into the lake!

So saying, O Tsuru shut her eyes and jumped into the water. Down, down, down she went, until she reached the bottom. No sooner had she alighted there, feeling (curiously enough) no effects of being under water, than she heard her name called.

'Strange indeed,' thought she, 'that I should hear my name at the bottom of Lake Biwa!'

She opened her eyes, and beheld standing beside her an old priest. O Tsuru asked him who he was, and why he had called her.

'I was a priest,' he explained. 'Perhaps I am one now. At all events, I often come to the bottom of the lake. I know all about your little sister Kame, of her faithfulness and affection for you, and of yours for her; I know also of the storm which capsized her boat when she had been praying to Kwannon on Chikubu Island, and of her being taken and eaten by that horrible carp. Believe me, none of these are reasons why you should take your own life. Go back on earth, rather, and pray to Buddha for your sister's blessing and for her soul. I will see that you are avenged on the carp, and I will see that you get well and strong. Take my hand, so, and I will take you back on shore.'

Having said this and carried Tsuru to land, the priest disappeared. For some time she lay unconscious; but when she came fully to her senses O Tsuru found herself on Chikubu Island, and, feeling considerably stronger than she had felt for some time, she went to the shrine dedicated to Kwannon, and passed the remainder of the night in prayer.

In the morning, having gone to the beach, she saw boats in the distance coming from Tsuzurao Point; but (what was more extraordinary) there lay, not ten feet from the shore where she stood, an enormous carp, fully nine feet in length, dead!

Among the search-boats that arrived was one containing her uncle and a priest.

Tsuru told her story. The carp was buried at a small promontory on the island, which is called Miyazaki. It was named Koizuka Miya-zaki (the Carp's Grave at Temple Cape).

O Tsuru lived to a ripe old age, and was never ill again. History tells of her at the age of seventy informing Ota Nobunaga, who came to destroy temples in the neighbourhood, that if he touched the shrines on Chikubu Island she herself would see to his destruction.