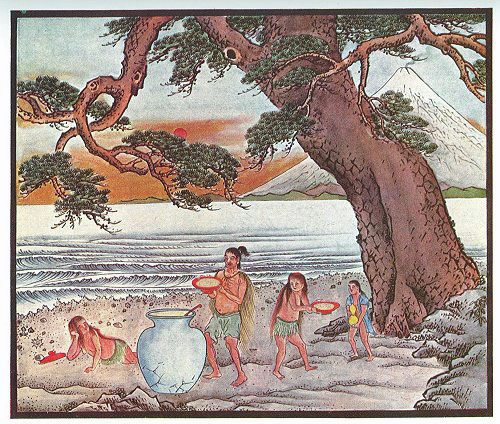 Two thousand or more years ago Lake Biwa, in Omi Province, and Mount Fuji, in Suruga Province, came into being in one night. Though my story relates this as fact, you are fully entitled to say, should you feel so inclined, 'Wonderful indeed are the ways of Nature'; but do so respectfully, if you please, and without levity, for otherwise you will grossly offend and will not understand the ethical ideas of Japanese folklore stories.

Well, at the time of this extraordinary geographical event, there lived one Yurine, a man of poor means even for those days. He loved sake wine, and scarcely ever spent a day without drinking some of it. Yurine lived near the place which is now called Sudzukawa, a little to the north of the river known as Fujikawa.

On the day which followed Fuji San's appearance Yurine became ill, and was in consequence unable to drink his cup of sake. He became worse and worse, and, at last feeling that there could be no hope for him, decided to give himself the pleasure of drinking a cup before he died. Accordingly he called to himself his only son, Koyuri, a boy of fourteen years, and told him to go and fetch him a cup or two of the wine. Koyuri was sorely perplexed. He had no sake in the house, and there was not a single coin left wherewith to buy. This he did not like to tell his father, fearing that the unpleasant state of affairs might make him worse. So he took his gourd, and went wandering along the beach, wondering how he could get what his father wanted. While thus employed Koyuri heard a voice calling him by name. As he looked up towards the pines which fringed the beach, he saw a man and a woman sitting beneath an immense tree; their hair was a scarlet red, and so were their bodies. At first Koyuri was afraid,--he had never seen their like before,--but the voice was kindly, and the man was making signs to him to approach. Koyuri did so in fear and trembling, but with that coolness which characterises the Japanese boy.

As Koyuri approached the strange people he noticed that they were drinking sake from large flat cups known as 'sakadzuki,' and that on the sand beside them was an immense jar, from which they took the liquor; moreover, he noticed that the sake was whiter than any he had seen before.

Thinking always of his father, Koyuri unslung his gourd, reported his father's illness, and begged for sake. The red man took the gourd, and filled it. After expressing gratitude, Koyuri ran off delighted. 'Here, father, here!' said he as he reached his hut: 'I have got you the sake, the best I have ever seen, and I am sure it tastes as good as it looks; try it and tell me!'

The old man took the wine and drank greedily, expressing great satisfaction, and said that it was indeed the best he had ever tasted. Next day he wanted more. The boy found his two red friends, and again they filled the gourd. In short, Koyuri had his gourd filled for five days in succession, and his father had regained spirits and was almost well in consequence.

Now, there lived in the next hut to Yurine an unpleasant neighbour who also was fond of sake, but too poor to procure it. His name was Mamikiko. On hearing that Yurine had been drinking sake for the last five days he became furiously jealous, and, calling Koyuri, asked where and how he had procured it. The boy explained that he had got it from the strange people with red hair who had been living near the big pine tree for some days past.

'Give me your gourd to taste,' cried Mamikiko, snatching it roughly. 'Do you think that your father is the only man who is good enough for sake?' Putting the gourd to his lips, he began to drink; but he threw it down in disgust a second later, and spat out what was in his mouth. 'What filth is this?' he cried. 'To your father you give the most excellent sake, while to me you give foul water! What is the meaning of it?' He gave Koyuri a sound beating, and then told him to lead the way to the red people on the beach, saying, 'I will beat you again if I don't get some good sake; so you had better see to it!'

Koyuri led the way, weeping the while at the loss of his sake, which Mamikiko had thrown away, and fearing the anger of his red friends. In the usual place they found the strangers, who had both been drinking and were still doing so. Mamikiko was surprised at their appearance: he had seen nothing quite like them before. Their bodies were of the pink of cherry blossom shining in the sun, while their long red hair almost frightened him; both were naked except for a green girdle made of some curious seaweed.

'Well, boy Koyuri, what are you crying about, and why back so soon? Has your father drunk the sake already? If so he must be almost as fond of it as we.'

'No, no: my father has not drunk it; but Mamikiko, here, took it from me and drank some, spitting it out and saying it was not sake; the rest he threw away, and then made me bring him here. May I have some more for my father?' The red man refilled the gourd and told him not to mind, and seemed amused at Koyuri's account of Mamikiko spitting it out.

'I am as fond of sake as any one,' cried Mamikiko: 'will you give me some?'

'Oh, yes; help yourself,' said the red man; 'Help yourself.' Mamikiko filled the largest of the cups, and, putting it to his nose, smelt the fragrance, which was delicious; but as soon as he put it to his lips his face changed, and he had to spit again, for the taste was nauseating.

'What is the meaning of this?' he cried angrily; and the red man answered still more angrily:

'You do not seem to be aware of who I am. Well, I will tell you that I am a shojo of high degree, and I live deep in the bottom of the ocean near the Sea Dragon's Palace. Recently we heard that a sacred mountain had arisen on the edge of the sea, and, as it is a lucky omen, and a sign that the Empire of Japan will exist in perpetuity, I have come here to see it. While enjoying the magnificent scene from Suruga coast I met this good boy Koyuri, who asked for sake for his poor sick old father, and I gave him some. Now, this sake is not ordinary sake, but sacred, and those who drink it live forever and retain their youth; moreover, it cures all diseases even in the aged. But you must know that any medicine is sometimes a poison, and thus it is that this sweet sacred white sake is good only in taste to the righteous, and bad-tasting and poisonous to the wicked. Thus I know that, as it tastes evil to you, you are an evil and wicked man, selfish and greedy.' And both the shojos laughed at Mamikiko, who, on hearing that the few drops which he must have swallowed would act as poison and soon kill him, began to cry with fear and to regret his conduct. He begged and implored forgiveness and that his life might be spared, and vowed that he would reform if only given a chance. The shojo, drawing some powder from a case, gave it to Mamikiko, and told him to swallow it in some sake; 'for,' said he, 'it is better to repent and reform even in your old age than not at all.'

Mamikiko drank it down this time, finding the wine sweet and delicious; it strengthened him and made him feel well, and he reformed and became a good man. He made friends again with Yurine and treated Koyuri well.

Some years later Mamikiko and Yurine built a hut at the southern base of Fuji San, where they brewed white sake from a recipe given them by the shojo, and they gave it to all who suffered from sake poisoning. Both Mamikiko and Yurine lived for 300 years.

In the Middle Ages a man who had heard this story brewed white sake at the foot of Mount Fuji; he made it with rice yeast, and people became very fond of it. Even to-day white sake is brewed somewhere at the foot of the mountain, and is well known as a special liquor belonging to Fuji. I myself drank it in 1907 without fear of living beyond my fifty-fifth year.