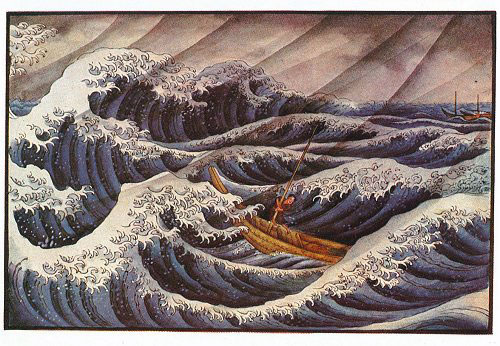 MANY years ago the Lord of Kishu, head of one of the three families of the Tokugawas, ordered his people to hold a hunting-party on Tomagashima (Toma Island). In those days such hunting-parties were often ordered, more for the purpose of improving drill and organisation than for sport. It brought men together, and taught others to handle them both on land and at sea. It made men recognise their commanders and superiors, and it disclosed what men were worthy of being made such. Hunting-parties of this kind were considered as military manoeuvres.

On this particular hunt or manoeuvre, the Lord of Kishu was to make a kind of descent by water on the island of Toma, and kill all the game that his landing-party could beat up.

Boats and junks were armed as if for war, and so were the men--except that they wore no armour.

The day for the entertainment was fine. Some sixty boats put to sea, and landed successfully about eight hundred men on Toma Island; and busy indeed were they chasing boar and deer the whole morning.

Towards afternoon, however, a storm of great violence came on and completely stopped the sport. The men were ordered to return to the shore and regain their boats before these should be smashed on the beach.

On embarking they put out to sea with the intention of gaining the mainland. On shore trees were being uprooted, columns of sand flew high in the air, and the gale was indeed terrific; if on shore it was as bad as this, it must be much worse at sea. The Lord of Kishu's boats and junks were tossed about as if they were floating leaves.

One of the party was a notedly brave man, Makino Heinei, who had been nicknamed 'Ino shishi' (Wild Boar) on account of his reckless bravery. Seeing that neither junks nor boats were making headway against the storm, he pushed the small boat off the junk, jumped into it alone, took the oars, laughed at every one, and cried: 'See here! You all seem to be too frightened to make headway. Look at what I do and follow me. I am not afraid of the waves, and none of you should be if you are to serve our Lord of Kishu faithfully.'

With that Makino Heinei shot out into the wild sea, and by extraordinary exertion managed to get some three hundred yards ahead of the rest of the fleet. Then the gale increased to such violence that he was incapable of doing anything. For fear of being blown out of the boat, he was obliged to hold tight to the mast and otherwise abandon his fate to good fortune. At times even the heart of the Wild Boar quailed. Often his boat was lifted clean out of the water by the wind; waves towered over him; he closed his eyes and awaited his fate. Finally, one squall more powerful than the rest blew his boat out of the water, and it was seen from the other boats (which lay at anchor) to disappear into the horizon. Heinei clung to the boat tightly. When the mast blew away he held on to the ribs. He prayed hard and earnestly. Some eight hours after the storm began, Heinei found the boat in comparatively smooth water. She was flooded, and she was a wreck; but still she floated, and that was all he cared for at the moment. Moreover, Heinei felt encouraged, because between two dark clouds he could see an opening and some stars, though at present it was absolutely dark and the driving rain had not ceased. Suddenly, when Heinei was wondering how far he had been blown from shore or from his friends, crack!--he felt his boat plump into a rock. The shock was so violent (for the boat was still being driven fast by the gale) that our hero lost his balance and was thrown fully ten feet away. Falling on soft stuff, Heinei thought he was in the sea; but his hands suddenly realised that it was soft wet sand. Delighted at this discovery, he looked at the clouds and the sky, and came to the conclusion that in another hour it would be daylight. In the meantime he thanked the gods for his deliverance, and prayed for his friends and for his lord and master.

As morning broke Heinei arose stiff, weary, and hungry. Before the sun appeared he realised that he was on an island. No other land was in sight, and it puzzled him sorely to guess where he could be, for from all the Kishu islands the mainland could be easily seen.

'Oh, here is a new tree! I have never seen that in Kishu,' said he. 'And this flower--that also is new--while here is a butterfly more brilliant than any I know.'

So saying and thinking, Heinei began looking about for food, and, being a Japanese, easily satisfied his appetite with the shellfish which were abundantly strewn everywhere after the storm.

The island on which Heinei had been cast was fair in size--some two miles across and ten in circumference. There was one small hill in the middle, which Heinei resolved to ascend, to see if he could discover Kishu from the top of it. Accordingly he started. The undergrowth of bush was so great that Heinei made a detour to another bay. The trees were quite different from any he had ever seen before, and there were many kinds of palms. At last he found to his delight a well-worn path leading up the mountain. He took it; but when he came to a damp place in the way he was in no whit reassured, for there he saw footmarks which could have been made by no one who was not a giant--they were fully eighteen inches in length. A warrior belonging to Kishu must fear nothing, thought Heinei, and, arming himself with a stout stick, he proceeded. Near the top he found the opening to a somewhat large cave, and, nothing daunted, began to enter, prepared to meet anything. What was his surprise when an enormous man, fully eight feet in height, appeared before him, not more than ten feet from the entrance! He was a hideous, wild-looking creature, nearly black, with long unkempt hair, flashing angry eyes, and a mouth that stretched from ear to ear, showing two glittering rows of teeth; and he wore no clothes except the skin of a wild-cat tied round his loins.

As soon as he saw Heinei he came to a standstill, and said, in Japanese, 'Who are you? how have you got here? and what have you come for?'

Makino Heinei answered these questions as fully as he thought necessary by telling his name and adding, 'I am a retainer of the Lord of Kishu, and was blown away by the storm after we had been hunting and holding manoeuvres on Toma Island.'

'And where are these places you speak of? Remember that this island is unknown to the world and has been for thousands of years. I am its sole occupant, and wish to remain so. No matter how I came. I am here. My name is Tomaru, and my father was Yamaguchi Shoun, who died, with his master Toyotomi Hidetsugu, on Koyasan Mountain in 1563. Both died by their own hands; and I got here, no matter how, and here I intend to remain undisturbed. I heard of your Lord of Kishu and of the Tokugawa family before I left Japan, and for that reason I will help you by giving you my old boat, in which I arrived. Come to the beach. I will send you off in the right direction, and if you continue sailing north-west you shall in time reach Kishu. But it is a long way off--a very long way.'

With that they walked down to the beach.

'See,' said Tomaru: 'the boat is well-nigh rotten, for it is many years since she was put here; but with luck you may reach Kishu. Stay--you must have some provision. I can give only dry fish and fruits; but to these you are welcome. And I must give you a present for your master, the Lord of Kishu. It is a kind of seaweed. You shall have some for yourself also. It is my great discovery on this island. No matter how bad a sword-cut you may get, it will stop the blood flowing and cure at once. Now, jump into the boat and row away. I like to be alone. You may speak of your adventure; but you are not to mention my name. Farewell!'

Heinei could only do as he was bid. Consequently, he made off. Rowing night and day and aided by favourable currents, he found himself off the coast of Kishu on the third day after leaving the island. The people were much astonished to see him alive, and the Lord of Kishu rejoiced, especially at the sword-cut-healing seaweed, which he had planted in the sea at a part of the coast which he renamed and called Nagusa-gori (District of the famous Seaweed).

Later Makino Heinei sailed again by permission of his Lord to get more seaweed. The island was found; but the giant had disappeared.

NOTE.--Mujinto Island, in the Pacific, is the group called Bonin Islands by Europeans.

We have 1427 guests and no members online