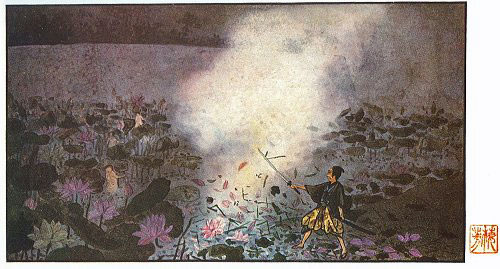 FOR some time I have been hunting for a tale about the lotus lily. My friend Fukuga has at last found one which is said to date back some two hundred years. It applies to a castle that was then situated in what was known as Kinai, now incorporated into what may be known as the Kyoto district. Probably it refers to one of the castles in that neighbourhood, though I myself know of only one, which is now called Nijo Castle.

Fukuga (who does not speak English) and my interpreter made it very difficult for me to say that the story does not really belong to a castle in the province of Idzumi, for after starting it in Kyoto they suddenly brought me to Idzumi, making the hero of it the Lord of Koriyama. In any case, I was first told that disease and sickness broke out in Kinai (Kyoto). Thousands of people died of it. It spread to Idzumi, where the feudal Lord of Koriyama lived, and attacked him also. Doctors were called from all parts; but it was no use. The disease spread, and, to the dismay of all, not only the Lord of Koriyama but also his wife and child were stricken.

There was a panic terror in the country--not that the people feared for themselves, but because they were in dread that they might lose their lord and his wife and child. The Lord Koriyama was much beloved. People flocked to the castle. They camped round its high walls, and in its empty moats, which were dry, there having been no war for some time.

One day, during the illness of this great family, Tada Samon, the highest official in the castle (next to the Lord Koriyama himself), was sitting in his room, thinking what was best to be done on the various questions that were awaiting the Daimio's recovery. While he was thus engaged, a servant announced that there was a visitor at the outer gate who requested an interview, saying that he thought he could cure the three sufferers.

Tada Samon would see the caller, whom the servant shortly after fetched.

The visitor turned out to be a yamabushi (mountain recluse) in appearance, and on entering the room bowed low to Samon, saying

'Sir, it is an evil business--this illness of our lord and master--and it has been brought about by an evil spirit, who has entered the castle because you have put up no defense against impure and evil spirits. This castle is the centre of administration for the whole of the surrounding country, and it was unwise to allow it to remain un-fortified against impure and evil spirits. The saints of old [268:1] have always told us to plant the lotus lily, not only in the one inner ditch surrounding a castle, but also in both ditches or in as many as there be, and, moreover, to plant them all around the ditches. Surely, sir, you know that the lotus, being the most emblematic flower in our religion, must be the most pure and sacred; for this reason it drives away uncleanness, which cannot cross it. Be assured, sir, that if your lord had not neglected the northern ditches of his castle, but had kept them filled with water, clean, and had planted the sacred lotus, no such evil spirit would have come as the present sent by Heaven to warn him. If I am allowed to do so, I shall enter the castle to-day and pray that the evil spirit of sickness leave; and I ask that I may be allowed to plant lotuses in the northern moats. Thus only can the Lord of Koriyama and his family be saved.'

Samon nodded in answer, for he now remembered that the northern moats had neither lotus nor water, and that this was partly his fault--a matter of economy in connection with the estates. He interviewed his master, who was more sick than ever. He called all the Court officials. It was decided that the yamabushi should have his way. He was told to carry out his ideas as he thought best. There was plenty of money, and there were hundreds of hands ready to help him--anything to save the master.

The yamabushi washed his body, and prayed that the evil spirit of sickness should leave the castle. Subsequently he superintended the cleansing and repairing of the northern moats, directing the people to fill them with water and plant lotuses. Then he disappeared mysteriously--vanished almost before the men's eyes. Wonderingly, but with more energy than ever, the men worked to carry out the orders. In less than twenty-four hours the moats had been cleaned, repaired, filled, and planted.

As was to be expected, the Lord Koriyama, his wife, and son became rapidly better. In a week all were able to be up, and in a fortnight they were as well as ever they had been.

Thanksgivings were held, and there were great rejoicings all over Idzumi. Later, people flocked to see the splendidly-kept moats of lotuses, and the villagers went so far as to rename among themselves the castle, calling it the Lotus Castle.

Some years passed before anything strange happened. The Lord Koriyama had died from natural causes, and had been succeeded by his son, who had neglected the lotus roots. A young samurai was passing along one of the moats. This was at the end of August, when the flowers of the lotus are strong and high. The samurai suddenly saw two beautiful boys, about six or seven years of age, playing at the edge of the moat.

'Boys,' said he, 'it is not safe to play so near the edge of this moat. Come along with me.'

He was about to take them by the hand and lead them off to a safer place, when they sprang into the air a little way, smiling at him the while, and fell into the water, where they disappeared with a great splash that covered him with spray.

So astonished was the samurai, he hardly knew what to think, for they did not reappear. He made sure they must be two kappas (mythical animals), and with this idea in his mind he ran to the castle and gave information. The high officials held a meeting, and arranged to have the moats dragged and cleaned; they felt that this should have been done when the young lord had succeeded his father.

The moats were dragged accordingly from end to end; but no kappa was found. They came to the conclusion that the samurai had been indulging in fancies, and he was chaffed in consequence.

Some few weeks later another samurai, Murata Ippai, was returning in the evening from visiting his sweetheart, and his road led along the outer moat. The lotus blossoms were luxuriant; and Ippai sauntered slowly on, admiring them and thinking of his lady-love, when suddenly he espied a dozen or more of the beautiful little boys playing near the water's edge. They had no clothing on, and were splashing one another with water.

'Ah!' reflected the samurai, 'these, surely, are the kappas, of which we were told before. Having taken the form of human beings, they think to deceive me! A samurai is not frightened by such as they, and they will find it difficult to escape the keen edge of my sword.'

Ippai cast off his clogs, and, drawing his sword, proceeded stealthily to approach the supposed kappas. He approached until he was within some twenty yards; then he remained hidden behind a bush, and stood for a minute to observe.

The children continued their play. They seemed to be perfectly natural children, except that they were all extremely beautiful, and from them was wafted a peculiar scent, almost powerful, but sweet, and resembling that of the lotus lily. Ippai was puzzled, and was almost inclined to sheathe his sword on seeing how innocent and unsuspecting the children looked; but he thought that he would not be acting up to the determination of a samurai if he changed his mind. Gripping his sword with renewed vigour, therefore, he dashed out from his hiding-place and slashed right and left among the supposed kappas.

Ippai was convinced that he had done much slaughter, for he had felt his sword strike over and over again, and had heard the dull thuds of things falling; but when he looked about to see what he had killed there arose a peculiar vapour of all colours which almost blinded him by its brilliance. It fell in a watery spray all round him.

Ippai determined to wait until the morning, for he could not, as a samurai, leave such an adventure unfinished; nor, indeed, would he have liked to recount it to his friends unless he had seen the thing clean through.

It was a long and dreary wait; but Ippai was equal to it and never closed his eyes during the night.

When morning dawned he found nothing but the stalks of lotus lilies sticking up out of the water in his vicinity.

'But my sword struck more than lotus stalks,' thought he. 'If I have not killed the kappas which I saw myself in human form, they must have been the spirits of the lotus. What terrible sin have I committed? It was by the spirits of the lotus that our Lord of Koriyama and his family were saved from death! Alas, what have I done--I, a samurai, whose every drop of blood belongs to his master? I have drawn my sword on my master's most faithful friends! I must appease the spirits by disemboweling myself.'

Ippai said a prayer, and then, sitting on a stone by the side of the fallen lotus flowers, did harakiri.

The flowers continued to bloom; but after this no more lotus spirits were seen.

We have 926 guests and no members online