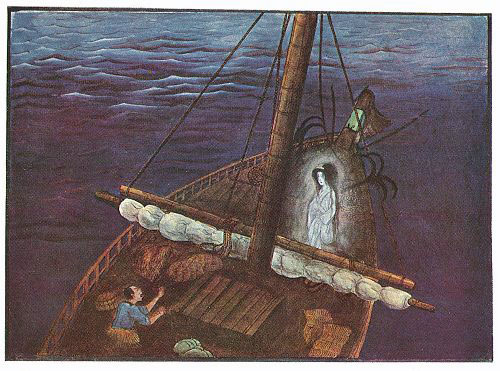 DOWN in the Province of Higo are a group of large islands, framing with the mainland veritable little inland seas, deep bays, and narrow channels. The whole of this is called Amakusa. There are a village called Amakusa mura, a sea known as Amakusa umi, an island known as Amakusa shima, and the Cape known as Joken Zaki, which is the most prominent feature of them all, projecting into the Amakusa sea.

History relates that in the year 1577 the Daimio of the province issued an order that every one under him was to become a Christian or be banished.

During the next century this decree was reversed; only, it was ordered that the Christians should be executed. Tens of thousands of Christianised heads were collected and sent for burial to Nagasaki, Shimabara and Amakusa.

This--repeated from Murray--has not much to do with my story. After all, it is possible that at the time the Amakusa people became Christian the sword in question, being in some temple, was with the gods cast into the sea, and recovered later by a coral or pearl diver in the Bunroku period, which lasted from 1592 to 1596. A history would naturally spring from a sword so recovered. But to the story.

The Cape of Joken Zaki (the Woman's Sword Cape) was not always so called. In former years, before the Bunroku period, it had been called Fudozaki (Fudo is the God of Fierceness, always represented as surrounded by fire and holding a sword) or Fudo's Cape. The reason of the change of names was this.

The inhabitants of Amakusa lived almost entirely on what they got out of the sea, so that when it came to pass that for two years of the Bunroku period no fish came into their seas or bay and they were sorely distressed, many actually starved, and their country was in a state of desolation. Their largest and longest nets were shot and hauled in vain. Not a single fish so large as a sardine could they catch. At last things got so bad that they could not even see fish schooling outside their bay. Peculiar rumbling sounds were occasionally heard coming from under the sea off Cape Fudo; but of these they thought little, being Japanese and used to earthquakes.

All the people knew was that the fish had completely gone--where they could not tell, or why, until one day an old and much-respected fisherman said:

'I fear, my friends, that the noise we so often hear off Cape Fudo has nothing to do with earthquakes, but that the God of the Sea has been displeased.'

One evening a few days after this a sailing junk, the Tsukushi-maru, owned by one Tarada, who commanded her, anchored for the night to the lee of Fudozaki.

After having stowed their sails and made everything snug, the crew pulled their beds up from below (for the weather was hot) and rolled them out on deck. Towards -the middle of the night the captain was awakened by a peculiar rumbling sound seeming to come from the bottom of the sea. Apparently it came from the direction in which their anchor lay; the rope which held it trembled visibly. Tarada said the sound reminded him of the roaring of the falling tide in the Naruto Channel between Awa and Awaji Island. Suddenly he saw towards the bows of the junk a beautiful maid clothed in the finest of white silks (he thought). She seemed, however, hardly real, being surrounded by a glittering haze.

Tarada was not a coward; nevertheless, he aroused his men, for he did not quite like this. As soon as he had shaken the men to their senses, he moved towards the figure, which, when but ten or twelve feet away, addressed him in the most melodious of voices, thus:

'Ah! could I but be back in the world! That is my only wish.'

Tarada, astonished and affrighted, fell on his knees, and was about to pray, when a sound of roaring waters was heard again, and the white-clad maiden disappeared into the sea.

Next morning Tarada went on shore to ask the people of Amakusa if they had ever heard of such a thing before, and to tell them of his experiences.

'No,' said the village elder. 'Two years ago we never heard the noises which we hear now off Fudo Cape almost daily, and we had much fish here before then; but we have even now never seen the figure of the girl whom (you say) you saw last night. Surely this must be the ghost of some poor girl that has been drowned, and the noise we hear must be made by the God of the Sea, who is in anger that her bones and body are not taken out of this bay, where the fish so much liked to come before her body fouled the bottom.'

A consultation was held by the fishermen. They concluded that the village elder was right--that someone must have been drowned in the bay, and that the body was polluting the bottom. It was her ghost that had appeared on Tarada's ship, and the noise was naturally caused by the angry God of the Sea, offended that his fish were prevented from entering the bay by its uncleanness.

What was to be done was quite clear. Someone must dive to the bottom in spite of the depth of water, and bring the body or bones to the surface. It was a dangerous job, and not a pleasant one either,--the bringing up of a corpse that had lain at the bottom for well over a year.

As no one volunteered for the dive, the villagers suggested a man who was a great swimmer--a man who had all his life been dumb and consequently was a person of no value, as no one would marry him and no one cared for him. His name was Sankichi or (as they called him) Oshi-no-Sankichi, Dumb Sankichi. He was twenty-six years of age; he had always been honest; he was very religious, attending at the temples and shrines constantly; but he kept to himself, as his infirmity did not appeal to the community. As soon as this poor fellow heard that in the opinion of most of them there was a dead body at the bottom of the bay which had to be brought to the surface, he came forward and made signs that he would do the work or die in the attempt. What was his poor life worth in comparison with the hundreds of fishermen who lived about the bay, their lives depending upon the presence of fish? The fishermen consulted among themselves, and agreed that they would let Oshi-no-Sankichi make the attempt on the morrow; and until that time he was the popular hero.

Next day, when the tide was low, all the villagers assembled on the beach to give Dumb Sankichi a parting cheer. He was rowed out to Tarada's junk, and, after bidding farewell to his few relations, dived into the sea off her bows.

Sankichi swam until he reached the bottom, passing through hot and cold currents the whole way. Hastily he looked, and swam about; but no corpse or bones did he come across. At last he came to a projecting rock, and on the top of that he espied something like a sword wrapped in old brocade. On grasping it he felt that it really was a sword. On his untying the string and drawing the blade, it proved to be one of dazzling brightness, with not a speck of rust.

'It is said,' thought Sankichi, 'that Japan is the country of the sword, in which its spirit dwells. It must be the Goddess of the Sword that makes the roaring sound which frightens away the fishes--when she comes to the surface.'

Feeling that he had secured a rare treasure, Sankichi lost no time in returning to the surface. He was promptly hauled on board the Tsukushi-maru amid the cheers of the villagers and his relations. So long had he been under water, and so benumbed was his body, he promptly fainted. Fires were lit, and his body was rubbed until he came to, and gave by signs an account of his dive. The head official of the neighbourhood, Naruse Tsushimanokami, examined the sword; but, in spite of its beauty and excellence, no name could be found on the blade, and the official expressed it as his opinion that the sword was a holy treasure. He recommended the erection of a shrine dedicated to Fudo, wherein the sword should be kept in order to guard the village against further trouble. Money was collected. The shrine was built. Oshi-no-Sankichi was made the caretaker, and lived a long and happy life.

The fish returned to the bay, for the spirit of the sword was no longer dissatisfied by being at the bottom of the sea.

^110:1- Cape of the Woman's Sword - The title to this old and hitherto untold legend is not much less curious than the story itself, which was told to me by a man called Fukuga, who journeys much up and down the southern coast in search of pearls and coral.