The Ancient Art Of Burning Sage

The Ancient Art Of Burning Sage 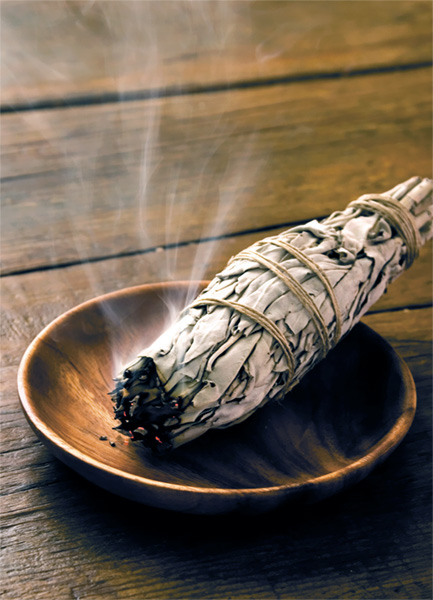 The ritual burning of herbs and herbal resins is common to many cultures in the world. From the rich frankincense of the Church and the Middle Eastern bazaar, to the heady incenses of Asia, to the raw energy of brush burning in many native cultures—the purification of space through this modality is a global phenomenon and one you can benefit from highly.

Burning sage is one of the oldest and purest methods of cleansing a person, group of people or space. While Native American sage burning is the most commonly recognized form of it today, it has nevertheless been a shared practice in other cultures too.

From the ancient Celtic druids who used sage as a sacred herb alongside Oak Moss for burning as well as medicinal purposes, to the Indigenous Peoples of the Amazon whose ‘Palo Santo’ (sacred wood) sage burning ceremonies are still practiced to this day.

Sage is for healing

Many who eschew the burning of incenses and herbs as a cleansing method and think that the only purpose in this tradition is to make dwellings smell nice, have perhaps never smelled sage burning. No one who has smelled the distinct acrid tang of burning sage would say that it could only be for ‘aesthetic’ olfactory purposes.

The Latin for sage, ‘Salvia,’ stems from the word ‘to heal.’ The other qualities of sage when burned, such as giving wisdom, clarity and increasing spiritual awareness, are also indicated in the name. It’s no accident that we refer to wise people as sagely.

The benefits of burning sage can be harnessed very simply by burning sage in your home, office or any other place in need of cleansing.

How to burn sage properly

Sage burning cleansing rituals can be as elaborate or as simple as you want them to be, but it’s of the highest importance that your intention be clear before you begin. If you are burning sage to purify a space, or a person (even yourself) then this needs to be clearly planted in your mind before you even the light the sage, and while taking the smoke around a home, or through a space.

The best sage to use for such purposes is white sage, although if you have garden sage then this will work fine also (just make sure it is dried). Any local farmer’s market or health food store should carry it, as well as new age stores. Of course, you can order online as well.

The process is simple enough. If you have a heavy earthenware pot (something heatproof), then place the bundled sage into the pot and light it for a few seconds before extinguishing the flame and letting the smoke billow up. Really dry sage will catch fire quickly, so watch your fingers.

Be careful not to breathe in the smoke directly, and not to fill the area too thickly with smoke—this is not a fumigation, just a cleansing, so no need to go overboard. Then slowly walk around where you are and take the smoke to each area you would like to cleanse. Concentrate on gateway areas, such as windows, doors, closets, as well as hallways. Also concentrate on the corners of a room. Most importantly, use your intuition. If you allow it, your space will usually inform you as to which areas need to be cleansed the most.

You may want to focus on particularly busy areas, both foot traffic wise (kitchen) and mentally (computer workstation). If you have a pet, be sure to sage them a little (if they allow it) and their sleeping area.

Try burning incense immediately after a saging session. Sage has a more masculine/yang aspect and is nicely coupled by the feminine/yin aspect of incense. Also experiment with bell ringing or hand clapping in between saging and incense burning for a total cleansing effect.

If you can at least burn sage in your living space on a weekly basis, then are guaranteed to notice a lightness of energy and calmness descend into your home from this practice. It can be a way to cleanse the old energy from the previous week, and welcome in the newly beginning week and all the possibilities it holds.