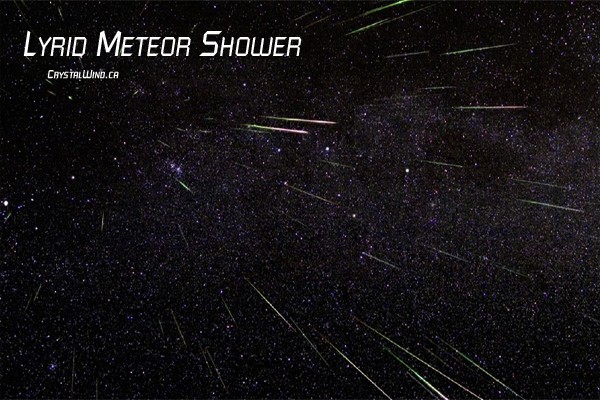 This month, the skies will light up with the Lyrid meteor shower! Don't miss your chance to see some shooting stars this month, as the next major meteor shower in the Northern Hemisphere isn't until this summer.

The annual Lyrid meteor shower is active each year from about April 16 to 25. In 2021, the shower will pick up steam beginning late at night Monday, April 19, 2021, probably peaking in the predawn hours on Thursday, April 22. The follow morning (April 23) might be good too. This shower comes after a months-long meteor drought that always falls between early January and April’s Lyrid shower each year.

While the average Lyrid shower produces 15 to 20 meteors per hour, this year skywatchers can expect to see about 10 per hour, depending on how clear and dark your sky is. Some years, the Lyrid meteor shower intensifies and can produce up to 100 meteors per hour in what's called an "outburst," but it is difficult to predict exactly when that will happen.

The Lyrids are so named because they appear to radiate out from the constellation Lyra.

The Lyrids, which peak during late April, are one of the oldest known meteor showers: Lyrids have been observed for 2,700 years. (The first recorded sighting of a Lyrid meteor shower goes back to 687 BC by the Chinese.)

The Lyrids are known for their fast and bright meteors, though not as fast or as plentiful as the famous Perseids in August, Lyrids can surprise watchers with as many as 100 meteors seen per hour. Sightings of these heavier showers occurred in 1803 (Virginia), 1922 (Greece), 1945 (Japan), and 1982 (U.S.). In general, 10-20 Lyrid meteors can be seen per hour during their peak.

Lyrids frequently leave glowing dust trains behind them as they streak through the Earth's atmosphere. These trains can be observable for several seconds.

Occasionally, the shower intensifies when the planets steer the one-revolution dust trail of the comet into Earth's path, an event that happens about once every 60 years. This results in an April Lyrid meteor outburst. The one-revolution dust trail is dust that has completed one orbit: the stream of dust released in the return of the comet prior to the current 1862 return. This mechanism replaces earlier ideas that the outbursts were due to a cloud of dust moving in a 60-year orbit. In 1982, amateur astronomers counted 90 April Lyrids per hour at the peak and similar rates were seen in 1922. A stronger storm of up to 700 per hour occurred in 1803, and was observed by a journalist in Richmond, Virginia.

The Lyrids are best viewed in the Northern Hemisphere during the dark hours (after moonset and before dawn). Find an area well away from city or street lights. Come prepared with a sleeping bag, blanket or lawn chair. Lie flat on your back with your feet facing east and look up, taking in as much of the sky as possible. After about 30 minutes in the dark, your eyes will adapt and you will begin to see meteors. Be patient—the show will last until dawn, so you have plenty of time to catch a glimpse.

Counts typically range from 5 to 20 meteors per hour, averaging around 10. As a result of light pollution, observers in rural areas will see more than observers in a city. Nights without the Moon in the sky will reveal the most meteors. April Lyrid meteors are usually around magnitude +2. However, some meteors can be brighter, known as "Lyrid fireballs", cast shadows for a split second and leave behind smokey debris trails that last minutes.

According to the American Meteor Society, they will peak on the evening of April 21 into the early morning hours of April 22. If you can't get out that night or the weather doesn't cooperate where you are, one night before or after the peak is also expected to present a pretty good viewing opportunity as well.

It is actually better to view the Lyrids away from their radiant: They will appear longer and more spectacular from this perspective. If you do look directly at the radiant, you will find that the meteors will be short—this is an effect of perspective called foreshortening.

Use Astrology to Become More YOU

The Arcturian Collective: September-October 2021: The Fires, Floods, & Alchemy of Change

A Message From Jesus: The Form You Have Chosen Is Always Perfect For You

Archangel Michael - A Glorious Vista Shall Open Before You

Sananda - Take Responsibility for the Planet