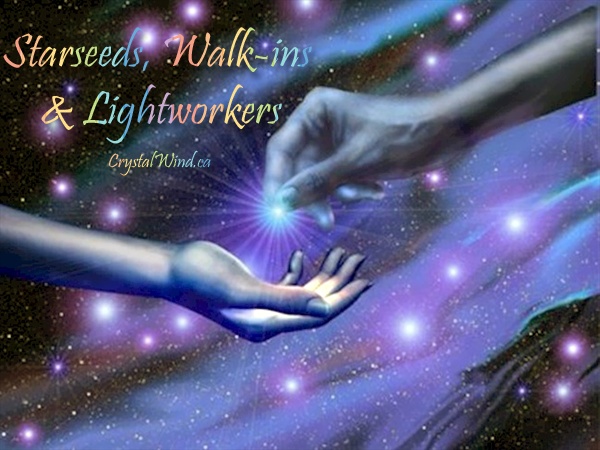 When a planet is set aside as an experiment for polarity integration, there exists a unique opportunity for all. This world is set aside as a place where individuals can work out their differences free of the memories that created the conflicts. A veil of amnesia provides the means.

Many people from other worlds have come to Earth for this purpose. With them they carry the last hope of their people, the last chance to save their worlds from demise. These are the starseeds and walk-ins. They will give of their expertise in order to have the opportunity to find the solution they require. This is why we say, you are the hope of the universe. Below are descriptions of starseeds, walk-ins and lightworkers.

Not everyone on Earth is from Earth. There are those who are here from other planets and civilizations in this and other universes. And though they walk around in human bodies, many have forms that are not human. Many are drawn to animals and other life forms on Earth that, in fact, closely resemble their true form. For example, some are very drawn to dolphins; there is a race of Beings called the Nommos who live on a planet in the Sirius star system. There are other factors indicating a starseed identity.

Starseeds commonly have three parents — two Earth parents and one off-world parent. For example, there can be an off-world father. In this case the Earth father will be the surrogate. There are also instances when a child has two or more off-world parents, each one contributing DNA to create the starseeded child. These are unique instances and more than I want to cover here.

The starseed child looks more like the surrogate Earth parent to ensure that they are accepted by that parent at birth. In the majority of cases the off-world parent is not of human origin as the human species is the least prolific in our universe.

Starseeds are here on Earth as representatives of their civilizations. Their purpose is to create templates that can be used by the members of their home world to overcome some problem that hinders their spiritual evolution as a soul group.

I am told that 144,000 civilizations have sent some of their people to Earth as starseeds. These civilizations closely watch their beloved children while here on Earth. The real parent, the starseed parent, is usually a guide for his child while that child is on Earth. It is my understanding that this is why so many starseeds have experienced visitations from an early age. Their family on their home world uses many ways to communicate and maintain the connection and love bond with their family member on Earth. This is also why so many civilizations have ships orbiting Earth right now. They have family here and therefore have a vested interest in seeing that Earth ascends.

Walk-ins are people from other dimensions who have walked into the body of a person on Earth. In all cases there is a pre-birth contract for this to occur.

Some walk-ins come into much younger bodies, but this is more the exception than the rule. When a child walk-in occurs, it is because the soul coming in needs the experiences of childhood and adolescence as a foundation for their mission. Childhood and adolescent walk-ins usually don’t awaken until they reach adulthood. More often than not, walk-ins step in when the host soul has reached adulthood. This allows them to utilize the maturity and life experience gained by the host soul.

These are the types of walk-ins:

Indications of a walk-in:

Walk-ins have a more challenging role on Earth because they have spent most of their incarnation on another plane of existence and then come to Earth in the middle to later part of that incarnation.

Lightworker is also a term that can be used to describe the Etheric Sirian and Orion Human soul group. This group was the remnant of Lyran humans that survived the First Great Galactic War. They are the heirs of Earth and having been here the longest are considered indigenous. For more information, read We are the Nibiruans, Return of the 12th Planet, and The Mission Remembered.

Indications of a lightworker:

We have 1911 guests and no members online