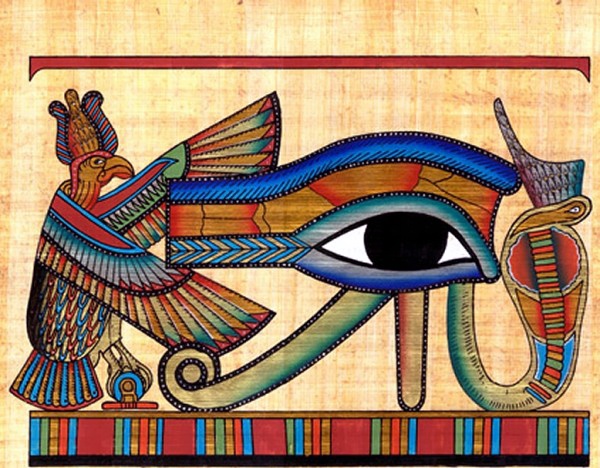 Eye of Ra is one of the popular ancient Egyptian symbols that is used as amulets, tattoos, etc. This article will provide you with some information about this symbol.

You might have come across ancient Egyptian symbols in the forms of tattoos, amulets, lucky charms etc. While, these symbols are increasing used in many different ways, there are very few people, who know about their meanings. There are many such symbols like the Egyptian scarab beetle, amenta, shenu, ouroborus, eye of Ra, etc. Eye of Ra is one of the most popular ancient Egyptian symbols.

What is Eye of Ra

Eye of Ra, which is otherwise known as eye of Horus is the ancient Egyptian symbol that is depicted as a human eye and eyebrow, along with the cheek markings of falcon. The symbol that represents the ancient Egyptian god Horus, also has a teardrop, which is found below the eye. Eye of Ra is also known as wedjat, udjat, etc. According to Egyptian mythology, the right eye of the falcon god Horus represents the sun god Ra and its mirror image (left eye) represents the moon and the god of magic called god Tehuti or Thoth. As per legends, Horus, the son of Osiris and Isis, lost his right eye, during a fight with this wicked brother Seth. Horus fought with his brother to avenge his father's death and Seth lost the fight. The god of magic, called Thoth, restored the lost eye. It is believed that the eye that was torn into pieces by Seth, was found by Thoth, who assembled the pieces. It is also believed that Horus used this eye for the rebirth of his father. Since then, the eye of Ra or eye or Horus has been used as a symbol of healing, resurrection, health, safety and protection. This symbol has been used in Egypt for a very long time. It has been used as a protective amulet, lucky charm, etc. It was also used as funeral amulets, which were meant to protect the dead in the afterlife. Even the sailors used to paint this symbol on their boats, so as to ensure safe travel. Now, you know more about the eye of Ra meaning. Let us now take a look at the use of the eye of Ra symbol in the ancient Egyptian measuring system.

Eye of Ra and Arithmetic

The eye of Ra symbol is also used as a notation of measurement, especially for measuring medicines. According to legends, the eye was torn into six pieces and so, as per this ancient Egyptian measurement system, the symbol was divided into six parts, each representing a specific sense and a particular fraction. According to this measurement system, 1/2 represented the sense of smell, 1/4 was for sight, 1/8 for thought, 1/16 for hearing, 1/32 for taste and 1/64 denoted touch. These fractions when added together resulted in 63/64 and not 1. It is believed that the left out fraction represented the magic of Thoth.

Now, you have a basic idea about the eye of Ra or eye of Horus meaning and its significance in Egyptian mythology. It is not just a symbol, but, is also linked to Egyptian Gods and Goddesses and Egyptian mythology. Even today, this symbol is very widely used in amulets, jewelry, artifacts, etc. Nowadays, one of the most popular uses of this symbol is in the form of the eye of Ra tattoo. While, some people wear it for protection, others are merely attracted by its charm, without any knowledge about Egyptian symbols and their meanings. In short, most of the ancient Egyptian symbols have a meaning like in the case of the eye of Ra. So, if you are interested in using such mythological symbols as tattoos, amulets or in other forms, it will be better to understand their meaning and significance.

With all that you have seen of the eye of Ra, knowing what it stands for, or the eye of Ra meaning will help you understand this symbol better. Take a look at what this symbol that is so popular among tattoo lovers defines.

The mystery of ancient Egypt, its symbols, legends and facts are all extremely intriguing. Among all these mysterious symbols and legends is that of the eye of Ra and what it stands for. A lot of you have heard of the eye of Ra, also known as the eye of Horus. Popularized as a tattoo symbol, worn as an amulet, and depicted in other traditional artifacts, the eye of Ra holds a unique meaning and symbolism. There is an interesting story about how this symbol came into being, and what it stands for, all of which we will discuss in this piece on eye of Ra meaning.

The Symbolism of the Eye of Ra

The eye of Ra or the Egyptian eye of Horus meaning stands as a symbol of protection and royal power. Horus was an ancient Egyptian sky god, with the head of a falcon. He was the son of Isis (a great matriarchal magician) and Osiris (the greatest of all the gods). While his right eye stood for the sun, or Ra, the left eye was associated with the moon, and the god Djehuti. Osiris was murdered by his own son and Horus' brother, Seth. In a battle to between Horus and Seth, to avenge the death of their father along with a strong desire for the throne, Horus lost his left eye. This battle was lost by Seth, but in the process, the eye was lost by the Egyptian God Horus. This eye was reassembled by Thoth, the god of magic and wisdom, thereby giving it the status of 'wedjat', literally translated as the sound one. This eye was given by Horus as an amulet to this father Osiris, as a way of restoring his life. As such, the eye of Ra or the eye of Horus came to be known as the eye of protection, healing and power. Soon, this symbol became commonplace and was seen in artifacts, with mummies, and in jewelry (as a protective amulet).

They eye of Ra meaning holds a deeper symbolism beyond being that of protection and healing. It is made up of six parts, that are associated with the six senses, i.e., touch, taste, hearing, sight, and smell. Each part is represented in terms of a fraction, which has been explained and can be associated with the eye of Ra picture given above:

In today's day and time, the eye of Ra is most popular as a tattoo. A lot of people get the eye of Ra tattoo for the symbolism it holds, or simply because of it's aesthetic appeal to some. The eye of Ra tattoo meaning then, is similar to the symbolism of the eye of Ra itself, where it stands for protection, healing and royal power. It is also believed as a protective power against the evil spirit. Another meaning of this tattoo that is fairly lesser known is that of struggle between the two brothers for truth and power.

With so much history behind it, it is no wonder that the eye of Ra has become the most popular element of tattoo art among the various ancient Egyptian symbols, that is further enhanced with meaningful sayings, quotes and other symbols that help make the eye of Ra meaning even deeper. You too may choose to sport this symbol as an amulet or a tattoo if you are a fan of all the mysteriousness that the ancient Egyptian culture has to offer.